Panda base caps number of visitors during holiday 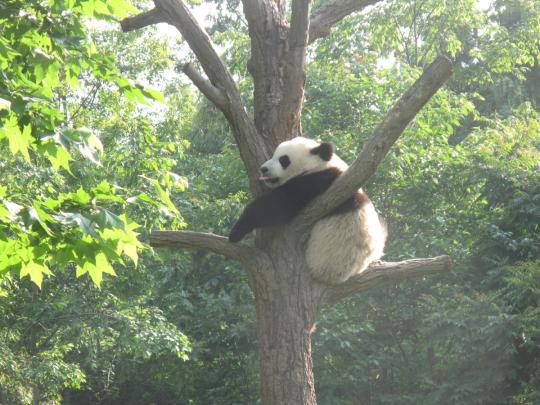 A panda rests in a tree at the Chengdu Research Base of Giant Panda Breeding in Southwest China's Sichuan province. (Photo by Huang Zhiling/chinadaily.com.cn)

Panda fans have been complaining about the increasing crowds at the Chengdu Research Base of Giant Panda Breeding in Sichuan province.

The base, which only used to be popular with expatriates, is being frequented by more Chinese thanks to improvements in their living condition and awareness of animal conservation.

On one peak day last year, as many as 100,000 people, the overwhelming majority of whom are Chinese, visited the base. They could not see pandas clearly at all, a base employee said.

The number of visitors is set to rise as people nowadays like traveling, she said.

To mitigate the problem, the base said visitors will have to book tickets online during the upcoming National Day holiday that runs from Oct 1 to 7.

Tickets will not be sold at the base's ticket office or ticket-selling machines during the period, according to the circular.

The maximum number of visitors allowed together in the base will be 22,000.

If this number is reached, the base will stop admitting visitors and will operate on a one-out, one-in basis, the circular said.

Visitors like Long Hongkun, an official from the Xianning Municipal Taxation Bureau in Hubei province, praised the new measures.

Long, a photographer, asked for special leave from a meeting to visit the base early one mid-August morning. But soon after he and a colleague approached the entrance to the base, he was shocked.

"There were so many people, the base was like a market," he said.

When he walked inside, he found people in front of and behind him. Everybody was sighing, regretting having braved the scorching sun to see people instead of pandas.

"All were complaining that the base should not have sold so many tickets. They joked bitterly that the pandas were seeing visitors instead of visitors seeing pandas," he said.

Pandas are indigenous to China and are scattered across Sichuan, Shaanxi and Gansu provinces.

China had 548 captive pandas at the end of last year, 196 of whom were in the Chengdu base.