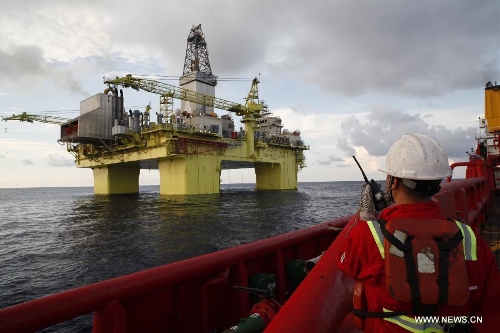 A state energy giant's announcement it had overcome temperature and pressure obstacles shows that China has overcome technological obstacles to develop and explore deep water oil and gas in the South China Sea, a Chinese expert said on Sunday.

Nanhai West Oil Production, affiliated with the China National Offshore Oil Corporation (CNOOC), has established a theory of natural gas accumulation in the high temperature and pressure areas of the Ying-qiong Basin, a newly discovered gas region in waters near the island of Hainan Province, media reported on Sunday.

Besides theoretical innovations, the drilling and completion team of the company have carried out supporting technical researches, such as accurate prediction based on multi-source and multi-mechanism pressure, and won the First Class Award of the 2017 State Science and Technology Prizes of China.

Lin Boqiang, director of the China center for energy economics research at Xiamen University, hailed the breakthroughs as an important contribution to China's energy security and economic and social development.

"China has the world's most advanced land oil and gas exploration technology, but the land resources have become saturated," Lin told the Global Times on Sunday.

Developing marine mining technology in the South China Sea is one of the feasible solutions to solve the energy crisis and ensure energy security in the future, said Lin.

The company has also established a high-quality reservoir development model and natural gas accumulation model in deep waters, forming a set of technologies in surface drilling and wellbore strengthening.

The future task is how to reduce the cost of the technology to achieve a wide range of applications to ensure China's energy supply and security, he said.