Historical bonds between HK, mainland will see region through unrest 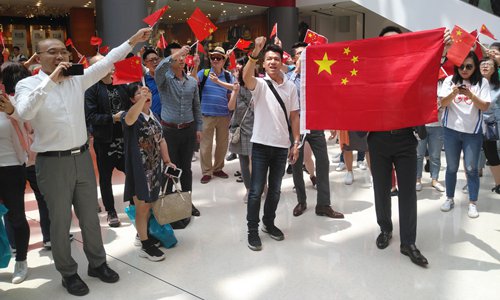 Local residents congregate at the atrium of the Olympian City in Hong Kong on September 13 and sing the national anthem. Photo: Li Qiaoyi/GT

○ A handful of locals from different sectors in Hong Kong revealed that in the past, almost every Hongkonger was inextricably linked with the mainland

Continuing violence over the past three months has been tearing Hong Kong society apart, with the opposition side stoking the flames by hyping the rhetoric that the mainland is eroding Hong Kong. Many netizens in the mainland are also trying to let off some steam with impractical ideas. Will the two sides' mutual support over the past few decades be wiped out by the unrest?

Findings from the Global Times' interviews with a handful of locals from different sectors of society revealed that in the past, almost every Hongkonger was inextricably linked with the mainland.

In the words of Chan Kin-por, a member of the Legislative Council of Hong Kong who chairs the LegCo Finance Committee, "Hong Kong and the mainland are essentially blood relatives."

The hotel where Global Times reporters stayed is located in Sheung Wan on Hong Kong Island. In the vicinity of the hotel are many local restaurants dotted around a warren of winding streets. These restaurants were mostly crowded with diners during meal times, but their bosses and waiters never looked down on non-Cantonese speaking mainland customers. They actively recommended their chef's specials instead.

Compared with the posh Central, Sheung Wan gives off a much more down-to-earth vibe. Century-old establishments are not rare in Sheung Wan. Although stores that hang Chinese knots and posters with the Chinese character 'fu' (wealth) are only a few feet from Connaught Road, the site of frequent riots, they seem to have been unfazed by the months-long unrest.

Diligence, flexibility and good-naturedness were the first layers of color the early settlers from the mainland added to Hong Kong. They are also the source of the spirit that transformed the city from a fishing village into an international metropolis.

Leung Ming-hing, 57, came to Hong Kong from Shenzhen with his parents who hoped to live a better life five decades ago.

"As long as one worked hard, he could easily get along well with local people," Leung said, recalling his childhood when his family had to struggle to make a living.

The city arguably changed the fate of Leung's family.

The mutual support between the mainland and Hong Kong could be said to be mostly about individuals changing for the better before the reform and opening-up, which became a turning point for the two sides to help each other jointly change the nation for the better.

Chan Kin-por made his first visit to the mainland in 1978 - the year that opened a landmark chapter in China's history with the start of reform and opening-up - when he began his career in a local bank.

The maiden visit left him the impression that the mainland was lagging behind in all fields, he told the Global Times in an exclusive interview in his office.

However, that also meant tremendous opportunities. In the wake of the reform and opening-up, many Hong Kong businessmen started to open factories in the mainland, funneling capital, manufacturing technologies and business methods into the motherland, giving a boost to the domestic economy, remarked Chan Kin-por.

At its peak in the Pearl River Delta, there were over 60,000 Hong Kong-invested factories, employing 10 million employees, helping turn the region into the world's factory, according to Jonathan Choi Koon-shum, chairman of the Chinese General Chamber of Commerce (CGCC).

Founded in 1900, the CGCC is one of the oldest and biggest chambers in Hong Kong. The CGCC began initiating training programs for senior officials and executives from the mainland in 1982, and has witnessed years of vicissitudes brought by the reform and opening-up.

Liu Ren, vice general manager of Dailywin Watch Group, said he still remembers that when he started to work at this Hong Kong-based watch manufacturer in 1996, senior managers of its production line in South China's Guangdong Province were all businessmen from Hong Kong.

As more labor-intensive industries like watch-making moved from Hong Kong to the Chinese mainland during China's economic reform and opening-up, Hong Kong businesses played an important role in helping emerging sectors to grow in the Pearl River Delta region.

"From capital investment to technology transfer, Hong Kong businesses were teachers for mainland companies," Liu said, noting that the first batch of Hong Kong businessmen investing in the mainland in the early 1980s-1990s also introduced advanced management experience and technologies.

"Many colleagues from Hong Kong taught us step by step. I worked as an intern for a year after I started at Dailywin. All my managers were Hongkongers, and they taught us a lot from design to craftwork," he told the Global Times.

At that time, there was a huge gap between the mainland and Hong Kong in terms of salary and way of life. "But we wanted to communicate with each other, for example, learn Cantonese to better understand our colleagues from Hong Kong," he said.

Hong Kong also received backing from mainland through two major crises: the Asian financial crisis in the late 1990s and the outbreak of Severe Acute Respiratory Syndrome (SARS) in 2003.

Chan Kin-por was still in the banking industry, working as an executive, in 1997, when Hong Kong was hit by the financial tsunami. What hit him the hardest was that a continued pay rise of over 10 percent annually, thanks to years of growth in the local economy, came to a sudden end. Suddenly, there was no pay rise, and even pay cuts, according to Chan Kin-por, expressing his gratitude for the central government's help in reviving the local economy.

The government of the Hong Kong made an unprecedented move to use the city's reserves to purchase HSI constituent stocks and the HSI futures, directly hitting back at the speculators.

But the move was a dangerous one. If HKSAR reserves were not sufficient, it would have meant the Hong Kong economy could collapse, Choi told the Global Times.

"That's why the involvement of the central government was very important," Choi said, adding that the People's Bank of China, the country's central bank, sent advisors to Hong Kong and offered its full support.

Norman Chan Tak-Lam, Chief Executive of the Hong Kong Monetary Authority, noted that by the end of 1997 the foreign reserves of Hong Kong had reached $80 billion which was sufficient to support the market operation, and therefore Hong Kong did not use the assistance of the central government in the end.

Chan Tak-Lam told the Global Times that he greatly appreciated the open pledge by the central government that it stood ready to make use of its reserves, if needed, to help Hong Kong fend off the speculators to preserve the city's prosperity and stability.

"The central government's pledge, offered during such a critical period, was undoubtedly a powerful boost to our confidence and morale," Chan Tak-Lam told the Global Times in a written interview.

A few years later, when Hong Kong became a city haunted by the SARS epidemic, it was again the mainland that offered a pivotal helping hand.

Leung said the SARS incident in 2003 had a detrimental impact on Hong Kong's catering industry, which he has been in since 16 years old, as well as the tourism sector that his wife worked in. He believes the central government played a decisive role in bringing Hong Kong out of the dilemma.

Chan Kin-por also praised Zhong Nanshan, a renowned expert in respiratory diseases, who offered the Hong Kong healthcare sector multiple valuable opinions to cope with the epidemic. The LegCo member noted that accelerated investment from the mainland propelled an economic resurgence in Hong Kong after 2003.

Nonetheless, drastic changes over the past decade appear to have brought about some new thinking about the ties between Hong Kong SAR and the mainland.

In the 1960s, Leung's cousins in Shenzhen would come to Hong Kong to stay with them for a few days and Leung's mother bought daily necessities for them to bring back home. They admired Leung's life at that time. But "every dog has its day," Leung said.

"Now we are poorer than them. Since 1997, we have felt the development of the mainland. The housing, medicare and finance in Hong Kong are not as good as the ones on the mainland," Leung said.

"If we compare the changes of the mainland and Hong Kong from our age, the mainland has developed quickly and changed a lot."

Instead of playing catch-up, the months-long protests in Hong Kong have almost cost Leung and his wife their jobs. Leung's restaurant has received few customers, while his wife's tour agency hasn't received group tours from the mainland for a long time.

In the case of Dailywin, the watchmaker has shifted a large part of its business from Hong Kong to Dongguan in Guangdong - the world's factory - as it exports 600,000 watches every year along with watch cases and accessories made especially for Swiss companies, according to Liu.

"Hong Kong and the mainland are seeing a smaller gap. We keep our office in Hong Kong small, and it's in charge of logistics and accounting services," he said, noting that as the international financial hub, the city is still very important for companies doing international business.

Some changes in mindset are especially worth pondering, which might eventually lead to a workable way to mend the rift.

There have been a multitude of changes in the mainland, especially in terms of infrastructure, said Chan Kin-por, stressing that some Hongkongers who haven't visited the mainland still imagine that it is the same as it was 15 years ago.

Chan Kin-por compares the city to a child sent out to a foster facility before the handover, and is supposed to be living a happy life after the handover. He hopes that actions will be taken to create closer family bonds.

Fan Lingzhi and Wang Cong contributed to the story 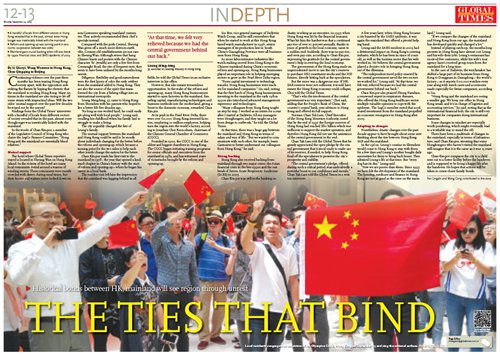 Newspaper headline: The ties that bind