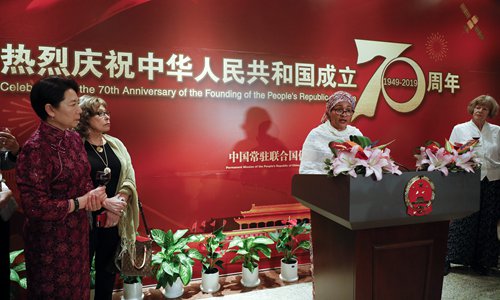 The United Nations (UN) Deputy Secretary-General Amina Mohammed (C) reads a message from UN Secretary-General Antonio Guterres during a reception held by China's permanent mission to the UN, to celebrate the 70th anniversary of the founding of the People's Republic of China, in New York, Sept. 20, 2019. (Xinhua/Li Muzi)

Several UN high-ranking officials and representatives from different missions to the UN on Friday evening shared with Xinhua their congratulations to the 70th anniversary of the founding of the People's Republic of China.

The Permanent Mission of China to the UN hosted a reception to celebrate the anniversary. More than 600 Chinese and UN officials, diplomats and representatives from different missions, including President of the 74th session of the United Nations General Assembly Tijjani Muhammad-Bande and UN Deputy Secretary-General Amina Mohammed, attended the reception.

"It's a challenging world, but we are very glad that we can count on China's support," UN Undersecretary-General for Peacekeeping Operations Jean-Pierre Lacroix told Xinhua.

Lacroix said he is thankful to the Chinese peacekeepers who are currently serving on the ground. "They are doing a fantastic job, they are making a difference for people, they are protecting vulnerable civilians."

Since 1989, China has dispatched over 40,000 peacekeepers to around 30 operations. More than 2,500 peacekeepers from China are currently on duty in eight missions.

UN Undersecretary-General for the Department of Field Support Atul Khare told Xinhua that among all five permanent members of the Security Council, China contributes the largest number of troops. "China provides high quality troops, engineers, doctors, nurses and helicopters. We are extremely grateful to China for all these contributions."

Khare said his hope is that China continues to develop, continues to enhance its participation, not only in peace and security, but in all the areas of the United Nations and the multilateralism system.

United Nations Children's Fund (UNICEF) Executive Director Henrietta Fore said in the next decade, China has promised some very strong goals such as about 85 percent of preschoolers in China, aged between three and six, will be enrolled in certified kindergartens by 2020, and that would be a great benefit to children.

China raised more than 700 million people out of poverty, and it has been a singular accomplishment that has helped to move the Sustainable Development Goals, Fore added.

UN Development Programme (UNDP) Administrator Achim Steiner said that China has not only lifted out millions of people out of poverty, but also have created the industrial base and the service base.

To Steiner, the investment on its people's education is a central part of China's success story too. "It holds many lessons for other countries."

Vassily Nebenzia, the permanent representative of Russia to the UN, said to Xinhua that China has made tremendous progresses in recent decades, and it's definitely one of the leading economies of the world. "I wish that the growth of the Chinese economy is accompanied by the improvement in the standards of life of Chinese people," he added.

Dian Triansyah Djani, the permanent representative of Indonesia to the UN said that China and Indonesia have been working closely together in ensuring peace and security in the world, and China has been playing an important role in the United Nations and "we will certainly hope it will continue to do so in the future."

Kairat Umarov, the permanent representative of Kazakhstan to the UN said the 70th anniversary is a huge landmark in the development of China. China today plays a key role in international arena, and it's a remarkable transformation.

Speaking of the Belt and RoadInitiative (BRI), Umarov said both China and Kazakhstan today are working on huge infrastructural developments, expanding the transport and transit capacities. The BRI brings development, progress, prosperity to other countries. "So we very much value this initiative of China."

"The BRI is the greatest initiative of the 21st century, and it has a lot to offer, not just (to) Asia, but the whole world. Pakistan is very proud and very happy that we are participating," said Maleeha Lodhi, the permanent representative of Pakistan to the UN.

"Pakistan and China have enjoyed 70 years of a very solid strategic relationship, and we look forward to the next 70 years of a relationship which is higher than the Himalayas and deeper than any sea that you can find," Lodhi added.

"China has been a key participant in the work of our organization and has played a central role as a pillar of international cooperation and multilateralism. China and the United Nations are continuing to work together to address pressing global issues," said Guterres in a message, which was read by his deputy, Amina Mohammed, at the reception.

"I thank you for your commitment to the collective efforts of the United Nations to address peace and security, human rights, and development challenges across the globe, and wish you continued success in the years to come," said Guterres.