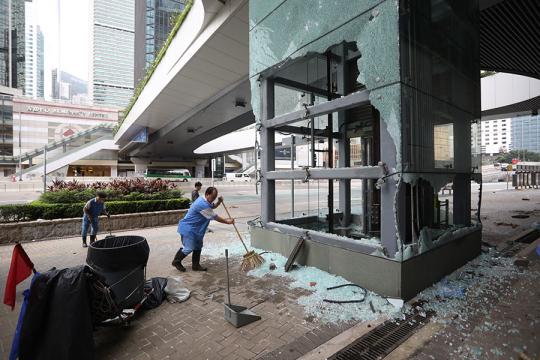 Workers clean up broken glass in Admiralty, Hong Kong, on Monday after a public elevator was damaged by violent protesters on Sunday. (Photo/China Daily)

Hong Kong worked on Monday to clean up debris and repair damage inflicted by protesters over the weekend.

More buildings and public property were vandalized on the city's 15th straight weekend of protests and violence.

In Admiralty district, the city's political center, protesters were televised smashing the glass perimeter of Admiralty Centre, a major office complex near the subway station, during an unauthorized public procession.

Protesters have been targeting the city's transportation facilities as they vent their fury on subway operator MTR Corp for applying for a court order to prevent vandalism and interference at its stations.

A cleaner said she and her colleagues had to clean up the scene overnight.

"I don't think they (the protesters) care," said a pedestrian who declined to be named.

He said that he had watched live news on TV throughout the violent incidents. "There were so many protesters. They were so agitated that they just started smashing things," he said.

Admiralty has been a frequent battlefield for violent protesters and police over the past three months. Previously, mass vandalism also took place at the Legislative Council complex.

Moreover, Wan Chai station was forced to close on Sunday due to the protests. MTR staff arrived at the station at 5 am-an hour earlier than usual-to clean up the scene.

MTR strongly condemned the vandalism in a statement.

The recurrence of violence and malicious vandalism at MTR stations not only severely affected passengers' journeys but also endangered the safety of passengers and MTR staff, it said.

Saying that the cases have been reported to the police, the corporation added it will take suitable follow-up actions and reserves the right to take legal action against the parties concerned.

Stressing that society should not tolerate any violent acts disrupting law and order, the New People's Party called for anti-mask legislation as soon as possible to dissuade violent protesters by removing their anonymity.

The Democratic Alliance for the Betterment and Progress of Hong Kong, the largest political party in the legislature, stressed that the protesters' malicious acts definitely cannot be tolerated.

In a statement issued Sunday night, it reiterated its support for police to bring the rioters to justice. The party also urged all residents to immediately draw a clear line against violence and to not tolerate such extremely violent acts.

Police also severely condemned such violent acts, which ignored law and order. It said law enforcement officials will continue to take resolute actions and bring all lawbreakers to justice.

Also on Sunday, prominent medical practitioners called on the medical sector and the people of Hong Kong to save the city from the "critical illness" of chaos and violence and support the police in restoring law and order.

The joint statement of 600 medical professionals in the city was published in some local newspapers on Monday. "Violence should never be glorified and encouraged," they said.

They also refused to be misrepresented after some other doctors and nurses in the name of the medical sector called for the government to concede to some of the demands of the protesters, including a blanket amnesty for those arrested in relation to the monthslong turmoil.