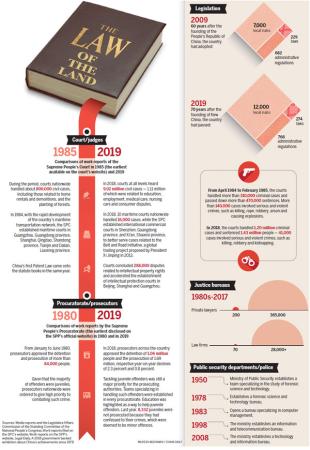 In 1954, the Constitution of the People's Republic of China was adopted by the NPC during its first plenary session.

Moreover, laws and rules in a number of major spheres, such as those related to marriage and how the courts and prosecuting authorities should function, were also drafted in the early years after the founding of New China, according to Feng.

However, those legislative moves were suspended during the "cultural revolution" (1966-76), he said.

Wei, the retired judge, said: "When I was a child, I knew there was a court near my home, but I didn't know what it was, let alone what laws our country had made and what the rule of law was. In most people's minds, 'court' equaled 'mystery'."

In 1977, Wang Liming, executive vice-president of Renmin University of China, enrolled at a law school in Hubei province. He described the environment for legal studies at the time as a "barren land".

"There were few books related to civil law. I just learned some rules about how to allocate compensation in broken marriages," he recalled.

A year later, the Third Plenary Session of the 11th CPC Central Committee was held in Beijing. Because the reform and opening-up policy was raised during the meeting, a guideline to the construction of the rule of law - there must be laws to work by, they must be observed and strictly enforced, and lawbreakers must be prosecuted - was opened for public comment.

Since then, China has pushed the rapid development of the rule of law.

For example, the general principles of the Civil Law as a milestone in helping to resolve civil cases were adopted in April 1986. "Although it was not a civil code, it offered basic resolutions and a legal framework on how to hear civil disputes," Wang said.

In 1987, Wei finished his military service and began working at the court in Haidian. "There were very few law school graduates, so we had to deal with cases while also digesting new laws," he said.

In the early 1990s, Wei handled about seven civil cases a month, mostly related to divorce or property inheritance. "After initiating a lawsuit, litigants had to visit the court repeatedly to submit materials, attend case hearings and get the verdict," he recalled.

"We began upholding the authority of the law, but our efficiency could not match the boom in disputes."

Judicial work has changed since the internet era arrived in the late 1990s. "Now, all the legal procedures, including case filings and hearings and verdict delivery, can be done online," Wei said, adding that technology is helping judges to reduce the burden caused by the surge in disputes.

Statistics from the Supreme People's Court, the country's top legal chamber, show that the courts heard 9.02 million civil cases last year, and the categories of disputes were extended to include new fields, such as online loans and online copyright.

Meanwhile, since 2013, all courts have been obliged to post their rulings online to improve the quality of verdicts.

According to Feng, the changes and moves came after law-based governance was highlighted by the central leadership at the 18th CPC National Congress, which resulted in the status of the rule of law rising further.

For instance, from 2013 to 2017, the nation's courts found 4,032 defendants not guilty, and also prevented the abuse of power and corruption by adopting the Supervision Law in 2018.

Yang, from the Chinese Academy of Governance, said a report delivered at the 19th CPC National Congress in October 2017 provided a glimpse of the future of the rule of law.

"It said advancing law-based governance in all fields is a profound revolution in China's governance. We must promote the rule of law, and work to ensure sound lawmaking, strict law enforcement, impartial administration of justice and observance of the law by everybody," he said.

Wei said the main requirement is to ensure that people from all walks of life fully respect the law, and to enhance legal awareness. If that can be done, the goal of building a country, government and society based on the rule of law will be achieved as soon as possible.