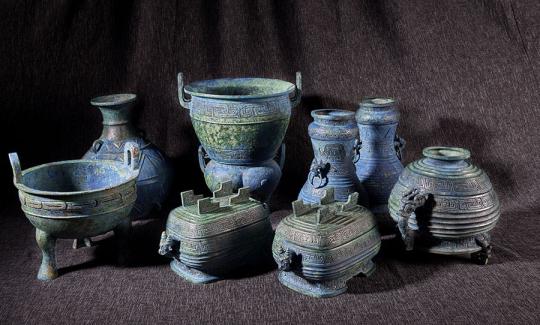 Recovered pieces of bronzeware have a history of over 2,500 years. (Photo/CHINA DAILY)

Eight lost pieces of Chinese bronzeware with a history of over 2,500 years were returned from Japan in August, the National Cultural Heritage Administration announced in a news conference in Beijing on Tuesday.

In early March, the ritual artifacts from the early stages of Spring and Autumn Period (770-476 BC) appeared in an auction catalog in Tokyo. However, the ancient bronzes were believed to have been illegally taken out of China, said Guan Qiang, deputy director of the administration.

Guan said the administration immediately began investigating and found signs within three days that the pieces had been illegally excavated and smuggled overseas.

"Their new patinas show the bronze items were excavated from underground in a recent period of time," Guan said.

"We also found that this set of bronzeware had once appeared in Shanghai in 2014," he added.

"And there is no record of them in any of 21 import and export administrations of cultural relics nationwide," Guan added.

Through inscriptions on the artifacts - 330 characters in total - and comparison with similar artifacts discovered by archaeologists, this set of bronzes was shown to come from an earl's tomb corresponding to a vassal state called Zeng in today's Hubei province, which lasted for over seven centuries, from the early Western Zhou Dynasty (c.11th century-771 BC) through the Spring and Autumn Period to the mid-Warring States Period (475-221 BC).

Diplomatic negotiations and a criminal investigation soon began to seek the return of the eight artifacts. The auction that had been scheduled for March 12 was suspended by the Japanese auctioneer, who said the artifacts were involved in "a dispute over inheritance of family property".

Gong Zhiyong, deputy director of the Ministry of Public Security's criminal investigation department, said a Shanghai resident surnamed Zhou, who was the auction client, emerged as the likely responsible party in the case. He finally agreed to hand over the artifacts in July, and the Chinese embassy in Tokyo received them on Aug 20.

Zhou arrived in China on the same plane as the artifacts and the case was referred to the Chinese repatriation working panel on Aug 23 for further investigation, Gong said.

"Return of the artifacts is on the basis of international law and cooperation with the Japanese," Guan said. "It contributed a new success in cross-border repatriation of cultural relics for the world."

He called the UNESCO Convention on the Means of Prohibiting and Preventing the Illicit Import, Export and Transfer of Ownership of Cultural Property, which was signed in 1970, a "milestone" in setting parameters for such cooperation. China joined in the convention in 1989, as did Japan in 2002.

An expert panel including scholars from Peking University, Hubei Provincial Museum and other institutions studied the artifacts following their return, concluding they "filled a void in historical studies".

The Zeng state, though missing from historical manuscripts, has become known through archaeological excavations since the 1960s. Still, mention of the Zeng earl named Kefu, cited by inscriptions on the returned bronzes, was never found on any items in previous archaeological research.

"It's a crucial complement for academic research on the Zeng state, particularly on its rituals and the family tree," said Deng Chao, deputy director of the National Cultural Heritage Administration's office managing museums and privately owned cultural relics.

The bronzes have been listed among the highest-level precious cultural relics.

The administration said they will be included in an upcoming major exhibition on the achievements of cultural relic repatriation since founding of New China in 1949.

The exhibition will open at the National Museum of China in Beijing on Sept 17 with a display of over 600 artifacts. Some 150,000 Chinese cultural relics have been returned from overseas via 300 cases since 1949, the administration said.