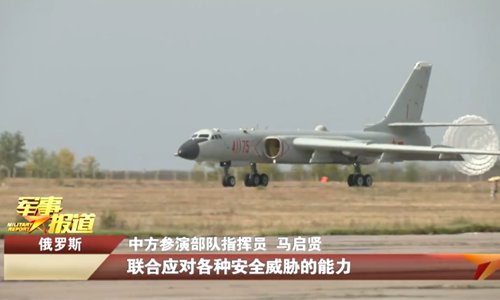 Russia on Saturday held a grand welcoming ceremony upon the arrival of Chinese armed forces, including well-anticipated Type 96A tanks and H-6K bombers, for the upcoming Tsentr-2019 (Center-2019) strategic drills.

"The drills will further enhance and deepen the comprehensive strategic partnership of coordination for a new era between China and Russia. It also has significant meaning on boosting our military's capability to deal with all kinds of security threats together with other countries' militaries," Ma Qixian, commander of the participating Chinese forces, told CCTV.

The drills will be held from September 16 to 21 in the Orenburg region of Russia. China, Pakistan, India, Kyrgyzstan, Kazakhstan, Tajikistan and Uzbekistan will participate, the Russian TASS news agency reported, citing a statement released by the Russian Defense Ministry.

Such practice is not targeted against any third party and has nothing to do with the regional situations, said Ren Guoqiang, spokesperson for the Ministry of National Defense, at a routine press conference on August 29.

In July, China and Russia conducted their first joint strategic patrol in Northeast Asia, with the Chinese side dispatching two H-6K bombers and the Russian side dispatching two Tu-95 bombers, said Wu Qian, spokesperson for China's Ministry of National Defense at a press conference in July.