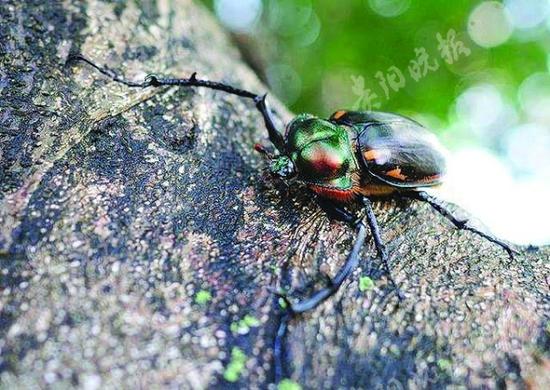 The bright-colored beetle, believed to be the cheirotonus jansoni, was found on a highway by a policeman with the Wenhua Police Station under the city's public security bureau around 9 a.m. on Saturday.

The local forest police then took the beetle back for further examination. With a length of 70 mm and width of 36 mm, the beetle has long forearms measuring 115 mm. It has an oval body with three pairs of legs and a pair of tentacles on its bright gold-green head.

The species has high requirements for its living environment, such as places with rich forest vegetation, uncontaminated air and water resources.

Ensuring the beetle did not sustain any injuries, the forest police released it back into the wild.