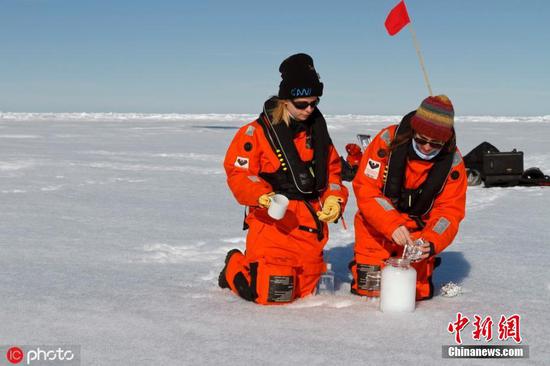 Scientists from the Alfred-Wegener-Institute collect snow samples in the Arctic. (Photo/IC)

The scientists of the AWI had taken samples from Helgoland, an island in the North Sea, the German federal states of Bremen and Bavaria, the Swiss Alps as well as from the Arctic.

According to AWI, "high concentrations of microplastics" were found in all tested locations, even in remote Arctic regions, on the island Spitsbergen as well as "in the snow on floating ice floes".

It would be "obvious that a large part of the microplastics is released into the snow through the air" and that some of the particles "probably" came from Europe, said Melanie Bergmann, head of the AWI scientist team which discovered the microplastics in the ice.

The highest amount of microplastics, which are defined as plastic particles smaller than 5 millimeters, was found in a sample of snow from a country road in Bavaria with 154,000 particles per liter of snow, according to the study.

The snow samples in Bavaria "especially contained various types of rubber", which are, amongst other things, used in automotive tires, the AWI study revealed.

Snow samples taken from Arctic ice contained up to 14,400 particles per liter of snow such as nitrile rubber, used in gaskets and hoses, acrylates and paint for coating buildings, ships, cars and offshore oil rigs, according to the study.

The scientist had found "significantly higher" concentrations of microplastic particles than in studies conducted by researchers who analyzed other places such as "dust deposits", according to AWI.

"Snow is extremely efficient when it comes to washing microplastics out of the atmosphere," explained AWI scientist Gunnar Gerdts,

Gerdts added that the method the team used to analyze the snow samples was very efficient and could even detect "the smallest particles -- down to a size of only 11 micrometers".

AWI scientist Bergmann warned that there would be "virtually no studies investigating the extent to which human beings are subject to microplastic contamination".

Most researchers would have been focusing on how animals and humans absorb microplastic particles through food, but "once we have determined that large quantities of microplastics can also be transported by the air, it naturally raises the question as to whether and how much plastic we are inhaling", Bergmann added. Enditem