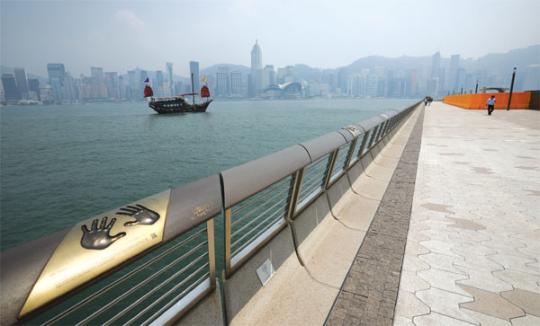 Few visitors can be seen on Friday at the Avenue of stars in Tsim Sha Tsui, which used to be a favorite spot for tourists to enjoy the splendor of Victoria Harbour and the Hong Kong skyline. （CALVIN NG / CHINA DAILY）

Hong Kong's tourism sector has been badly hit by the ongoing protests in the city, with both mainland and international visitor arrivals plunging due to safety concerns, while hotel occupancy rates are also down.

Visitor arrivals began to fall since July, when the number of visitors dropped 1.5 percent year-on-year in the first week and plummeted a further 26 percent by the end of the month, noted Secretary for Commerce and Economic Development Edward Yau Tang-wah at a press conference on Thursday.

In the first week of this month, visitor arrivals fell by 31 percent and the situation keeps deteriorating, he added.

Many mainland tour groups and individual tourists have canceled trips to Hong Kong.

Hong Kong Tourism Association Executive Director Timothy Chui Ting-pong said mainland tour groups have recorded a decline in business since June, when protests started across the city. The situation was most evident especially from late July to early this month — with business dropping by 33 percent to 50 percent.

Liu Weiwei, a 32-year-old accountant from southwestern Sichuan province, said she had planned to visit Hong Kong with her boyfriend later this month to shop for jewelry for their wedding. "Now I have to change my plans as safety is my top priority," Liu added.

"Previously, many of my friends liked to go shopping in Hong Kong. The social unrest will deter numerous potential buyers from going there. This is not in the interests of Hong Kong and its people," she said.

Apart from tour agencies, hotels are also suffering. Tourism sector lawmaker Yiu Si-wing forecast that occupancy rate of Hong Kong hotels could drop by 10 percent and their revenue could slump by 20 percent.

Many foreign tour groups have also canceled plans to visit Hong Kong due to the protests in the city, with foreign arrivals dropping over 50 percent in the past two months, said Chui.

Since 22 countries and regions have issued travel alerts against Hong Kong, global sentiment to travel to the city has been dampened.

Following Australia and the United States, Canada stepped up its warnings to travelers to Hong Kong on Thursday by updating its travel advisory to Level 2, which urges travelers to "exercise a high degree of caution" while in Hong Kong. The city is now on the second tier of Canada's four-tier alert system.

The number of tourists from long haul markets declined 3.5 percent in June. Of these, visitors from the US, Australia and Canada account for more than half, according to the Hong Kong Tourism Board.

Western tourist numbers are likely to continue to fall. Lam Chi-ting, general secretary of the Federation of Hong Kong Trade Unions in Tourism, warned that other Western countries may follow Australia, the US and Canada.

Meanwhile, visitor numbers from Southeast Asia have also dropped — even though Hong Kong is traditionally a popular destination in the region.

He said his agency, United Holidays, only expects about 400 visitors this month; there have been no bookings yet for next month.

The agency has asked staff to take annual leave starting from this month. They may have to take leave without pay next month if the unrest continues.

Edward Yau said the government would try to provide an accurate picture to the international community of the current situation in Hong Kong. "But the best solution is for the violence to end and for daily life to resume as normal."

He urged people to help ease social tensions in the SAR as endless protests across the city are dealing a serious blow to the economy.