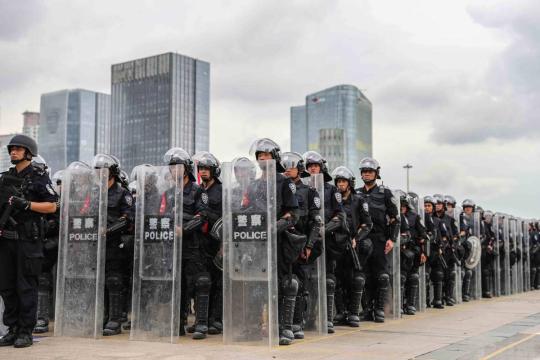 Shenzhen police force carried out a mass drill on Tuesday as the city in South China's Guangdong province ramps up efforts to ensure public security for the 70th anniversary of the founding of the People's Republic of China.

A total of 12,000 policemen, along with 50 armored vehicles, 200 emergency unit vehicles, 1,200 motorcycles, five helicopters, eight vessels and two amphicars, participated in the exercise.

The drill was meant to promote the police force's combat capability to maintain social stability and security, creating a sound environment for the 70th anniversary of the founding of the PRC.

The operation, which began at 10:30 am in Shenzhen's Bao'an District, covered anti-terrorism exercises, joint air and sea patrols and anti-riot exercises.

Chen Bin, deputy head of the security and patrol unit at Shenzhen Public Security Bureau, said ensuring social order and public security in Shenzhen is of great importance for Guangdong province and also for the whole country.

"Shenzhen plays an important role in the country's reform and opening up," he said. "The city is also adjacent to Hong Kong. Therefore, it is highly important to maintain Shenzhen's social order and public security."

The police force began to prepare for the exercise four days ago.

Liu Liu, a traffic police officer who took part in the drill, said despite persistent scorching weather in Shenzhen over the past several days, he had maintained high spirits.

"I feel so proud to be a member of Shenzhen police. The drill shows the spirit of our team," he said.

Such large-scale drills help enhance the capabilities of the Shenzhen police, Liu said, adding that he has the determination and confidence to protect the city and its residents.

"It is my first time seeing such a massive drill with my own eyes," said a Shenzhen resident who only gave her surname as Yan. "I was so excited when I saw five helicopters flying through the air. It gives me a strong sense of security and deepens my love for the city."