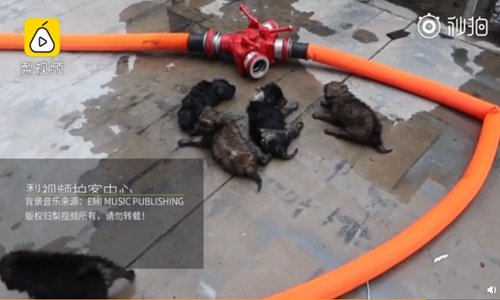 After dousing a blaze in a storefront warehouse workshop, firefighters in East China's Jiangsu Province carry five soaking puppies to a connection bracket of a firehose to wash them off. （Photo/screenshot of video by Pear Video）

After dousing a blaze in a warehouse workshop, firefighters in East China's Jiangsu Province carried five soaking puppies from the rubble, one of which was revived after receiving CPR.

A video posted by Pear Video shows a firefighter delicately carrying from the wreckage an unconscious black puppy that appears to be little more than one month old. Still wearing his oxygen mask, he gingerly lays it on the ground, wraps his hands around the little animal's tiny chest and starts pumping.

After the puppy shows signs of life, the firefighters take it to a connection bracket of a firehose to wash it off.

Another firefighter then carries four other puppies out and lays them near the leaking hose. All appear to have survived.

Finally, the puppies' mother emerges from behind the broken-down retractable steel gate, shakes off the soaking she received when firefighters were putting out the blaze and wonders over to her brood with her tail wagging.

The unusual rescue received a lot of praise on social media. "Melts my heart," a netizen wrote.