Completion of tunnels in Tibet rail line within reach 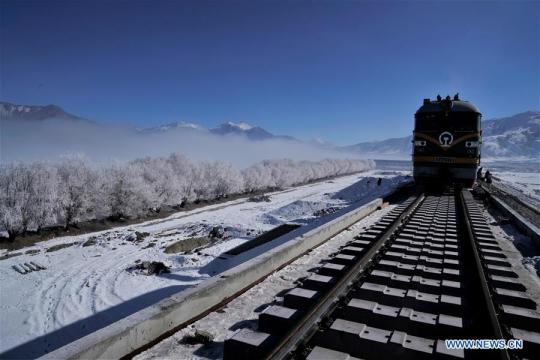 Photo taken on Dec 23, 2018 shows a construction site on the Lhasa-Nyingchi section of the Sichuan-Tibet Railway in Southwest China's Tibet autonomous region. (Photo/Xinhua)

Most of the tunnels along the Lhasa-Nyingchi section of the Sichuan-Tibet Railway have been completed, railway authorities said over the weekend.

The Bukamu Tunnel, one of the longest tunnels on the railway linking Lhasa and Nyingchi in Southwest China's Tibet autonomous region, was completed on Friday. With its completion, 96 percent of the tunnels on the Lhasa-Nyingchi section of the railway are finished.

The 9,240-meter Bukamu Tunnel is located in Manling county of the region's eastern Nyingchi city. According to the China Railway 17th Bureau Group, and it is also the 37th tunnel to be completed for this section, leaving 10 other tunnels to be finished by the end of the year.

"Once construction began in October 2015, it took more than 300 workers 1,234 days to complete the tunnel," said Yan Qingjing, an official of the Lhasa-Nyingchi Railway Headquarters, which is part of the group.

Wang Shucheng, director of the project, said the tunnel's depth reaches 1,381 meters at one point, and high geostress inside causes the tunnel's highest temperature to reach 42 C, much higher than the railway tunnel construction safety temperature of 28 C.

"The tunnel is like a steam room," said Kang Yanjun, who works with the group. "Once you get inside, you begin sweating profusely. It is like doing anaerobic exercise."

The technicians must exert a lot of energy every time they work in the tunnel, and each person needs at least 10 bottles of water, Kang said.

"We have implemented a 90-minute work shift schedule," Kang said. "We place ice blocks in the tunnel to prevent workers from getting sick because of the high temperature, and we also use fans and oxygen transfer stations inside the tunnel."

With a length of 2,416 kilometers, the Sichuan-Tibet Railway connects Southwest China's Sichuan province with the Tibet autonomous region. It is the second railway linking Tibet with the rest of the world, along with the Qinghai-Tibet Railway.