Chief executive: It's time for HK to bring back order, say no to violence 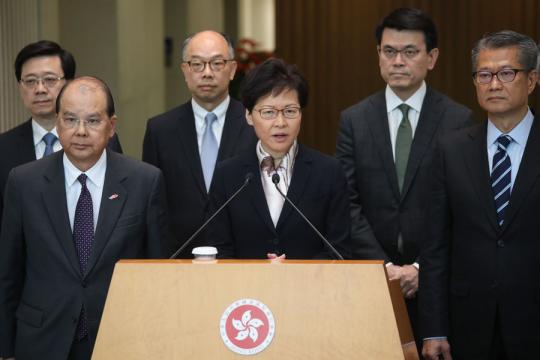 Hong Kong's Chief Executive Carrie Lam Cheng Yuetngor speaks at a news conference in Hong Kong on Monday. Lam said recent chaos has pushed the city to the "verge of a dangerous situation", but the government will be resolute in ensuring public order. (Photo/CHINA DAILY)

Carrie Lam Cheng Yuet-ngor, Hong Kong's chief executive, said on Monday that protesters' sustained acts of disruption are pushing "our city, the city we all love and many helped to build, to the verge of a dangerous situation".

Lam, speaking at a news conference, pledged resolute action to maintain law and order and restore confidence. She said the protests have gone beyond the issue of a now-shelved extradition amendment bill and now are aimed at destabilizing the special administrative region at the cost of the stability of 7 million residents' lives and futures.

Monday's problems were caused by direct disruption by protesters as well as a general strike in the city.

Lam said the protesters' actions are a blatant provocation to national sovereignty and challenge the "one country, two systems" principle.

"We all love Hong Kong and have made different contributions to its stability and prosperity over the years. This is the time for us to rally together to set aside differences and bring back order, and say no to chaos and violence," she said.

It will take time for Hong Kong to restore what has been done to its economy, livelihood and the entirety of society, she added.

Financial Secretary Paul Chan Mo-po, speaking to reporters, warned that Hong Kong's economy is in great danger from China-U.S. trade tension, the global economic slowdown and many international variables. Locally, many businesses have been affected. Economic growth was negative in the second quarter, and if things stay the same in the third quarter, Hong Kong will fall into a recession, Chan cautioned.

On Monday, Hua Chunying, a spokeswoman for the Foreign Ministry, said in a statement that violent acts by radical protesters in Hong Kong have gone beyond the bottom line of a civilized society and endangered the lives of the city's residents as well as their properties.

Some in the United States ignore such problems as abuse of power by its police officers but arrogantly criticize and smear Hong Kong police officers who perform their duties in a constrained and civilized manner in the face of violent protesters, Hua said. Some U.S. politicians reveal a double standard through their hypocrisy and arrogance, she said.

The ministry again urges the U.S. to stop interfering in the affairs of China's Hong Kong Special Administrative Region and sabotaging the SAR government's operation that is based on rule of law, Hua said.

In a statement issued at around 7 pm on Monday, Tung Chee-hwa, vice-chairman of the Chinese People's Political Consultative Conference National Committee, threw his support behind the SAR government and police for doing what's necessary to safeguard the rule of law and bring back peace and order.

Tung said many residents, facing the risk of being harassed and insulted by "rioters", went to work as usual to safeguard Hong Kong's core value by actions.

Tung said that the nation's sovereignty must not be infringed upon, adding that the rioters' ulterior motive is to take control of the SAR and threaten the central government by taking the public, the city's traffic and social order hostage. That, he said, will not succeed.

Despite strong criticism, demonstrators planned to go ahead with more protests. Monday's protests left commuters struggling to get to work during the rush hour.

By noon, changes or suspensions had been forced on 70 bus routes after 15 roads and three tunnels were blocked, Transport Department officials said at a separate media briefing on Monday afternoon. Some 100 traffic lights were vandalized and services were gradually being restored, causing confusion and danger to pedestrians and vehicles.

Some protesters placed trolleys and bikes on subway tracks and used gasoline bombs that could cause serious damage and injuries, officials said.

On Monday, police officials said 420 people had been arrested in relation to the protests since June. Monday alone saw 47 men and 35 women arrested on offenses including participating in an unlawful assembly and possession of offensive weapons. In addition, since June, 139 police officers have been injured, with two still hospitalized.

The personal data of over 1,200 police officers and their families has been leaked. Hate speech and messages against officers, some cursing their children, have been circulated online, officials said.