- China's exclusive breast-feeding rate within the first six months of life was 20.8 percent in 2013, lower than the average level (37 percent) of middle-income and low-income countries in the world: UNICEF

Thirty-one-year-old Yan Lin insists on feeding her 4-month-old baby only with breast milk as suggested by doctors and experts. However, she finds it inconvenient when shopping with her child at large malls in Xi'an, Northwest China's Shaanxi Province.

"I found only a few baby care facilities in Xi'an. Only newer shopping malls have baby care rooms and not every floor has one," Yan told the Global Times.

As a result, she always takes a cloth when she goes out with her baby. "Whenever I need to breastfeed my child, I will find a quiet place and use the cloth to cover my breast," Yan said.

The World Health Organization (WHO) and the United Nations Children's Fund (UNICEF) said breast milk is the best source of nutrition for newborns and infants under 2, and contribute the most to children's health and growth.

In China, the issue is more necessary as the country is experiencing a declining birth rate.

The country's exclusive breast-feeding rate within the first six months of life was 20.8 percent in 2013 - lower than the average level (37 percent) of middle-income and low-income countries in the world, according to UNICEF's 2018 data. Proposed by the National Health Commission in the National Nutrition Plan (2017-2030), China aims to reach the exclusive breast-feeding rate for infants under 6 months to at least 50 percent by next year.

Prior to World Breast-feeding Week (August 1 to 7), the Global Times reporter visited Vietnam for a close look at breast-feeding promotion.

"I felt lonely at that time. None of my family members understood me," Nguyen Thi Thao, a single mother, shared her breast-feeding experience at a meeting in Hanoi in July.

After her child was born, she gave the infant formula milk, after which the baby refused to breast-feed. Under family pressure, however, she insisted on breast-feeding.

By chance, she discovered a Facebook group called "Bé Tí Bú Ti" ("infants need breast milk") which has 250,000 members. Things changed with the help of many mothers like her after Nguyen joined the group.

"The information on breast-feeding in this group is more helpful and reliable than what I saw online. The mutual-help group made me feel I was not alone." She said mothers just take their babies out, meet in a park to exchange experiences about breast-feeding. 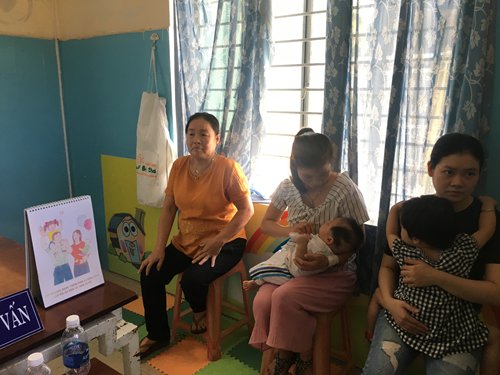 However, most of the mothers in the group live in the city, which raises the question for rural women who are usually not covered by social insurance.

To cover mothers living in the countryside who lack enough and proper knowledge about breast-feeding, since 2010, A&T and the Vietnamese government partners have been conducting the "Little Sun Social Franchise" project. More than 1,100 clinics in Vietnam were opened within the government health system for mothers to seek help on breast-feeding, complementary feeding (foods and liquids introduced at 6 months of age), and child health.

In a village called Hoa Phong commune in Hoa Vang district in Da Nang, which is a popular tourist destination, doctors at the village clinic said women's perception of breast-feeding has changed.

Some mothers in rural areas thought milk formulas were better and more nutritious than breast milk, which is a misconception, said Nguyen Kiem, head of the Hoa Phong Health Center.

"Since we operated the 'Little Sun' counseling service, the exclusive breast-feeding rate in our village has increased to more than 80 percent, with the stunting rate declining from 20 to 8.3 percent, and underweight rate from 13.5 to 5.8 percent," Nguyen Kiem said such a service may change the lives of more than 200 newborns in the village.