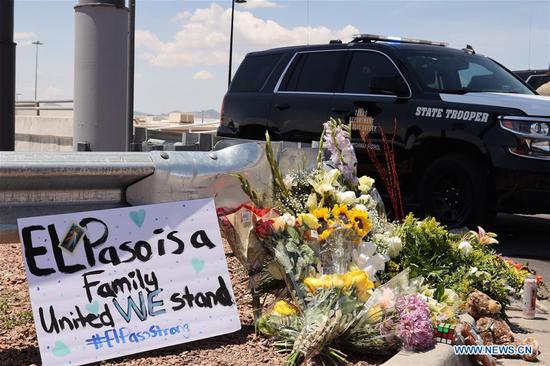 A temporary memorial site for mass shooting victims is seen near the Walmart shopping mall area in El Paso of Texas, the United States, on Aug. 4, 2019. (Xinhua/Liu Liwei)

The U.S. federal government is treating a mass shooting in the U.S. state of Texas on Saturday, which killed at least 20, as a domestic terrorism case, a U.S. attorney said Sunday.

"We are treating this as a domestic terrorism case," John Bash, the U.S. attorney for the Western District of Texas, said at a media briefing.

"We are conducting a methodical investigation with our partners...but with a view towards bringing federal hate crimes charges and federal firearm charges which carry a penalty of death," said Bash.

The attack in the border city of El Paso in Texas left 20 people dead and 26 wounded. A 21-year-old white male has been arrested.

"It's been devastating to the community," said Bash, who lived there when he was very young.

"And we're going to do what we do to terrorists in this country -- deliver swift and certain justice," Bash added.

El Paso Police Chief Greg Allen said at the briefing that the police are beginning to remove the bodies from the shooting scene so that the scene can be turned over to the public again.

According to the police chief, the suspect under custody has been "cooperating" with the investigation so far.

"He basically didn't hold anything back. Particular questions have been asked and he responded."

Explaining the situation when the suspect was detained, Allen said the suspect surrendered when he saw the law enforcement officers approaching. "That was on the farther west side from the shooting site," he said.

When asked to describe the shooting scene, Allen said, "There are no words you can place to say something like that. You have to see it for yourself."

"You would leave an impression you will never forget," he added.

A prayer vigil has been organized in El Paso by local community leaders for the citizens to come together at the difficult time.