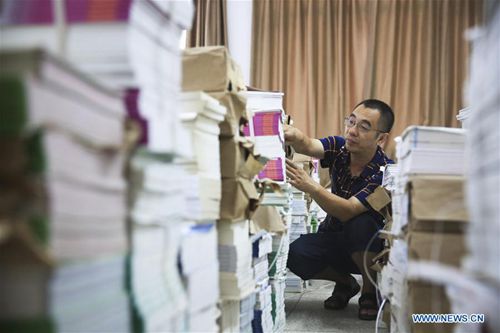 Revised Chinese high-school history textbooks for this year's fall semester highlight national sovereignty, territorial integrity and ethnic unity, as the textbooks more clearly state that the regions, including the Diaoyu Islands, South China Sea, Xinjiang, Tibet and Taiwan, have been part of China since ancient times.

The history of China as a united multi-nationality country has been underlined in the new textbooks, and the content of the administration of successive dynasties over border areas, including the Diaoyu Islands, Xinjiang Uyghur Autonomous Region, Tibet Autonomous Region, South China Sea and Taiwan, has been strengthened, Ye Xiaobing, a history professor at Capital Normal University and director of the History Teaching Professional Commission of the Chinese Society of Education who participated in publishing the high-school history textbooks, told the Global Times on Thursday.

For example, the new history textbooks for junior high-school students state that the Diaoyu Islands and South China Sea have been Chinese territory since ancient times, and China first discovered, named and operated those regions, Ye said.

China began long-term jurisdiction over the Diaoyu Islands and their affiliated islands since the Ming Dynasty (1368-1644), and those islands have been included in Chinese maps since then. Since the Western Han Dynasty (206BC-AD25), the ancient Chinese people sailed and discovered the South China Sea islands.

"Highlighting such content aims to strengthen education on national security and territorial integrity to high-school students to help them form a correct historical cognition and build national and cultural identity," Ye said.

The new history textbooks will be distributed and used by all high schools in the Chinese mainland starting September, according to Ye.

People's Education Press, the main publisher of national textbooks, and the Xinhua Bookstore in Beijing told the Global Times that the new history textbooks will be available by the end of this month.

The new history textbooks were prepared amid secession movements in Hong Kong and the island of Taiwan. Observers believe that strengthening national territory and unity education is significant at the moment for young people in the Chinese mainland to further strengthen their patriotism and concept of national unity.

A new guideline to improve the quality of compulsory education from the Communist Party of China (CPC) Central Committee and State Council in July said compulsory education - six years primary and three years secondary - should cultivate the students' core socialist values, traditional Chinese culture and mental health. Schools should strengthen education in patriotism, collectivism and socialism, and guide children and teenagers to follow the Party.

Senior high-school textbooks were also revised. The MOE has revised textbooks on politics, Chinese and history as of June, the MOE website said.