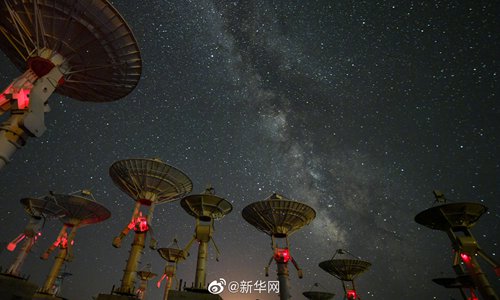 Chinese scientists are building new devices to watch the sun from North China, which will enhance China's capability of detecting and forecasting spatial disasters caused by solar variation.

Researchers at the Ming'antu Observing Station based in the Inner Mongolia Autonomous Region are building three new devices to monitor the sun - a decameter wave radio heliograph, an interplanetary scintillation telescope and an ultra-wideband solar radio dynamic spectrometer, the Xinhua News Agency reported on Wednesday.

Those new devices, once completed, will help the base monitor the sun at a broader range in any circumstances and any time, either from the bottom of the solar atmosphere to near-earth space or under severe weather, Tan Baolin, a research fellow with the National Astronomical Observatories at the Chinese Academy of Sciences (CAS) in Beijing, told the Global Times on Thursday.

Tan said those devices, "like eyes to a human," will enhance China's ability to detect and warn of severe spatial weather variation such as a cosmic ray storm.

The decameter wave radio heliograph would also fill in gaps on observation of a solar radio burst, according to Xinhua.

The Ming'antu Observing Station is affiliated with the national astronomical observatories under the CAS, according to Xinhua.