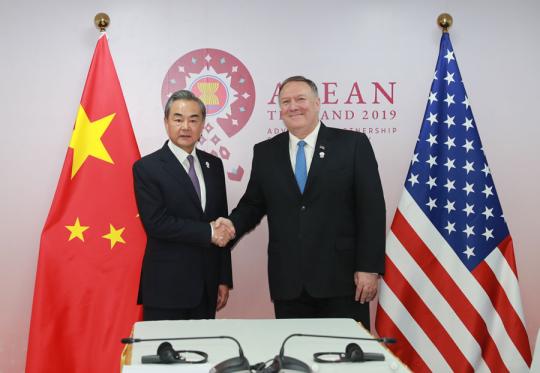 The current priority for China and the U.S. is to effectively breathe life into the latest consensus of their top leaders and manage and control differences on the basis of mutual respect, State Councilor and Foreign Minister Wang Yi said on Thursday.

Also, the two countries should expand cooperation based on mutual benefit, Wang said when meeting with United States Secretary of State Mike Pompeo on Thursday in Bangkok, Thailand.

Wang said the two nations should bolster contacts and reduce misjudgment of each other, and they should take a proper view of each other's strategic intentions.

The U.S. is expected to facilitate, not block, people's visits between the two countries, Wang said.

Pompeo said that neither U.S. President Donald Trump nor the U.S. government has any intention of containing China's development, and they are ready for cooperation in a wide range of areas. He said they expect economic and trade consultations to move forward smoothly.

Pompeo said the U.S. government remains true to the three landmark China-U.S. joint communiques and the one-China policy, according to a release of the Chinese Foreign Ministry.

The U.S. supports reinforcing bilateral people-to-people exchanges and is willing to effectively resolve problems in that regard, Pompeo added.

At a news conference in Bangkok on Thursday, Pompeo said that "the meeting with my Chinese counterpart today was always professional".

Ruan Zongze, vice-president of the China Institute of International Studies, said, "In fact it is China's lasting growth that makes a more powerful cooperative partner (for the U.S.) in the global arena."

Ruan said close China-U.S. collaboration at the Group of 20 is an example, and such teamwork has served like a powerful glue that steadfastly binds together the interests of the two countries.

Their bilateral trade accounts for roughly one-fifth of total world trade, and it is necessary for Beijing and Washington to foster mutual trust and eliminate fluxes and uncertainties in the face of fresh global complexities and challenges, Ruan said.

Speaking of the latest round of China-U.S. high-level economic and trade consultations that concluded in Shanghai on Wednesday, Pompeo said "this was a very professional discussion", adding, "We are working with them (China) on many fronts."

The working groups of China and the U.S. will maintain frequent communication before the next round of high-level talks in the U.S. in September, Ministry of Commerce spokesman Gao Feng said at a news conference in Beijing on Thursday.

Gao said both sides clarified the principles and approach for future negotiations. They discussed China's possible purchase of more U.S. agricultural products based on domestic need, and the U.S. creation of favorable conditions for the transaction, he added.

Some Chinese companies have purchased U.S. agricultural products and applied for the removal of additional tariffs on these foodstuffs, Gao said.

Asked whether Huawei Technologies Co was mentioned in the latest talks, Gao said it is hoped that the U.S. will implement its commitment on Huawei as soon as possible.

Wang Xiaosong, a professor of international trade at Renmin University of China's School of Economics, said the talks need to be conducted in the spirit of equality and mutual respect, while placing extreme pressure on the other party can only hinder progress toward a deal. The professor said the two nations need to align their interests and find a middle ground.