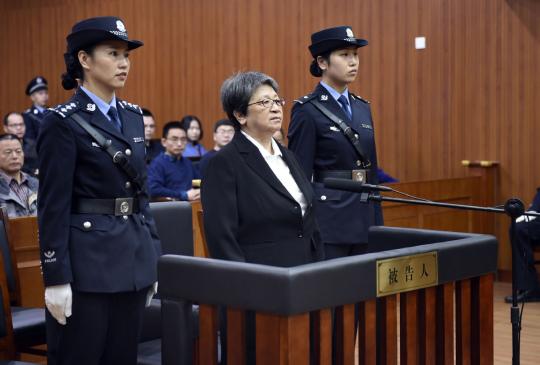 Yang Xiuzhu, former deputy mayor of Wenzhou, Zhejiang province, is sentenced to eight years in prison in 2017 for embezzlement and bribery. [Photo/Xinhua]

Thousands of fugitives extradited, repatriated or persuaded to return home

Yang Xiuzhu, a prisoner in Zhejiang province, said people would find it difficult to imagine the bitterness and loneliness she experienced as a fugitive overseas.

Yang, 72, the former deputy mayor of Wenzhou, Zhejiang, fled China in 2003. She was accused of corruption and embezzling about 250 million yuan ($36.3 million) for personal use.

In 2015, she was No 1 on the list of China's top 100 corruption suspects for which red notices had been issued by Interpol, and she returned to China to plead guilty in November 2016. A red notice is a request by a country for the detention and extradition of an individual for whom that nation has issued an arrest warrant.

"The environment outside the Chinese mainland was strange and the loneliness was overwhelming," Yang said.

She worked in Chinese restaurants so she could talk with the waiters in her native Wenzhou dialect. "I just wanted to find a place to speak Chinese," she said.

She left the mainland for Hong Kong, and then went to Singapore, France, the Netherlands, Italy, Canada and the United States.

Yang sought refuge in the Netherlands, where she stayed for 11 years. Dutch police detained her in 2014 for illegal immigration, but she managed to flee to Canada by using a fake identity and passport. She then took a train to the US, where she was detained for using fake documents, but she filed an appeal and sought asylum there.

While she was in the Netherlands, Yang accidentally injured herself. "I took painkillers for a month, but was still in agony. A family doctor then asked me to go to the hospital for an X-ray, and it showed I had a broken rib and that a new rib had grown into the old one in just a month," she said.

While she was detained in the US, she developed a cataract, and was transferred to another prison. "I felt helpless and desperate, so I finally decided to come home," Yang said.

In October 2017, after being convicted of embezzlement and bribery, she was sentenced to eight years in prison and fined 800,000 yuan (about $116,000) by Zhejiang Provincial Intermediate People's Court.

Referring to other fugitives, Yang said, "Their only choice is to come back and seek lenient punishment, rather than living anxiously in hiding."

She is one of the 6,000 economic fugitives who have been extradited, repatriated or persuaded to return home to face trial from more than 120 countries and regions since 2014, when China launched the Operation Skynet campaign to target fugitives and seize their ill-gotten assets.

Chinese anti-graft officers have confiscated and returned a total of 4.7 billion yuan in so-called dirty money from abroad, according to the National Commission of Supervision.

In the past five years, the nation has made great progress in seizing fugitives and returning their illicit assets. Anti-graft authorities have extended their supervision to focus on public officials, directors of State-owned companies and financial institutions to prevent them from being corrupted and fleeing overseas.

"Under the leadership of the CPC Central Committee, we have seen significant achievements in capturing economic fugitives and confiscating their ill-gotten funds in the past five years," said Cai Wei, deputy director of the International Cooperation Bureau, which is responsible to the National Commission of Supervision.

"We have cut off the suspects' escape routes and given them little room to move outside China, and have also effectively changed their ideas about fleeing overseas, laying a solid foundation for achieving an overwhelming victory in the fight against corruption," he said.