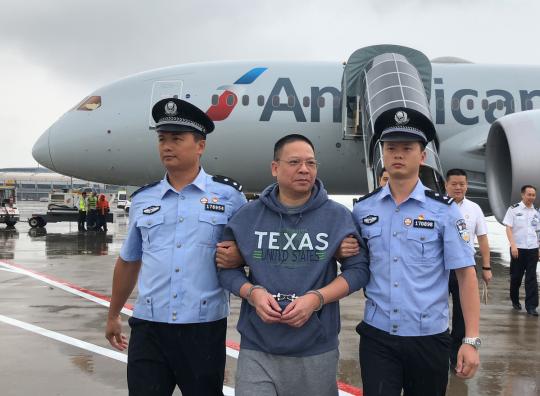 Xu Chaofan, former head of a Bank of China subbranch who fled to the US, arrives in Beijing on Wednesday. [Photo/Xinhua]

To help strengthen the hunt for fugitives, in March last year, the National Commission of Supervision and commissions at all levels were established nationwide to enhance efforts to combat fugitives and return their ill-gotten assets.

Jiang Laiyong, a senior researcher with the Chinese Academy of Social Sciences, said the new commissions have integrated supervisory, anti-corruption, and bribery and corruption-prevention functions that have been spread throughout various departments, and optimized resources for fighting graft.

"The new supervisory system has extended inspection from Party members to all public officials, leaving no loopholes in the supervision of power, and no dead ends in fighting corruption," he said.

According to the National Commission of Supervision, after the commissions at all levels were set up, the number of people under their supervision rose sharply.

Huang Feng, law professor at Beijing Normal University, said, "Under the new commissions, there is wider supervision of people. Supervisors also have a more challenging task in seizing fugitives and returning their dirty money."

According to the national commission, anti-graft officers nationwide will increase their oversight of public officials and those in leading positions at State-owned companies and financial institutions to prevent them becoming involved in corruption and fleeing overseas.

Xu Yi, an official with the Shenzhen City Commission of Supervision in Guangdong, said it has tightened oversight of public officials' passports and is using facial recognition technology to investigate those who use their ID cards to apply for duplicate passports with different public security departments.

Supervisors in Shenzhen have also worked closely with the anti-money laundering department at the People's Bank of China in the city to monitor any suspicious flow of funds being sent to officials' accounts overseas and to promptly share intelligence, while tightening border controls, he said.