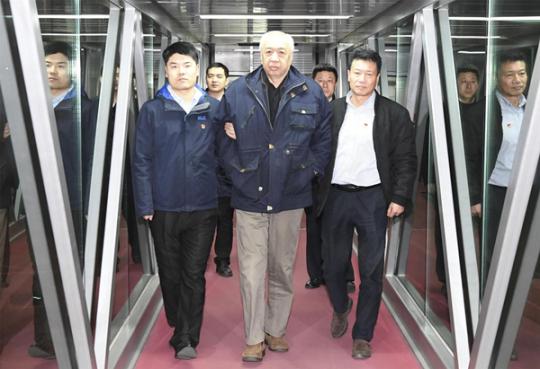 Jiang Lei, former executive vice-chairman of China Association of Automobile Manufacturers, is escorted by disciplinary officers at Beijing Capital International Airport on Friday after he returned to China to face graft charges. [Photo/Xinhua]

More than five years ago, a number of corrupt officials and directors of State-owned companies took advantage of judicial differences and the lack of bilateral extradition treaties to escape to popular Western destinations, including the US, Canada, Australia and New Zealand, to avoid punishment.

They sent millions of yuan in illicit assets to their accounts overseas through money laundering. To date, more than 900 corrupt officials are still at large abroad, especially in Western countries.

In 2014, China set up an office to coordinate anti-corruption efforts to help bolster the hunt for economic fugitives and return their ill-gotten funds.

"Wherever the suspects may flee, we will capture and bring them to justice," President Xi Jinping said in October 2017 during the 19th Communist Party of China National Congress.

Xi has also repeatedly stated, "China will strengthen judicial cooperation with other countries to fight against cross-border corruption and avoid them becoming 'safe havens' for fugitives."

In April 2015, the office saw Interpol red notices issued for 100 of the country's top corruption suspects. To date, 59 of them have returned from more than 17 countries and regions, including the latest, Liu Baofeng the former director of a local branch of Huatai Securities in Shenzhen, Guangdong province.

Last month, Liu, 53, who is accused of corruption and embezzling public funds for stock trading, returned home to plead guilty after spending 18 years on the run in Canada. He has yet to be sentenced.

"I have shown remorse for my crimes, and realized that foreign countries are not safe havens. Wherever I escape, I will be returned for punishment," he said.

Song Wei, head of the Anti-corruption Research Center at the University of Science and Technology Beijing, said, "The fruitful results in seizing fugitives show fully that we have improved the ability to capture suspects and secured the system to prevent others fleeing overseas."

Zhuang Deshui, an anti-corruption professor at Peking University, said that recently the number of officials suspected of corruption fleeing overseas is much lower than those who have returned from abroad, mainly because "an effective mechanism has been established to timely monitor the Party and government officials and prevent them escaping abroad".

He said anti-graft officers should enhance political and legal education for public officials and guide them to abide by the laws and to have a belief in building clean governance.

Moreover, Zhuang said advanced methods, including big data analysis and updated information technology, will be used to tighten management and supervision of Party members to avoid them fleeing overseas.