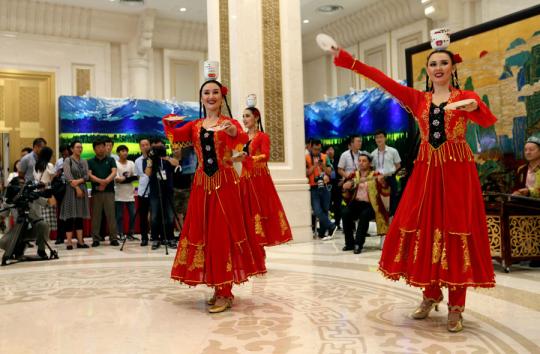 Folk dancers perform at a Beijing news conference on Tuesday about the achievements of the Xinjiang Uygur autonomous region during the past 70 years. (WANG ZHUANGFEI / CHINA DAILY)

Most of the trainees at vocational education centers in the Xin-jiang Uygur autonomous region have graduated from the centers and have started to play a positive role in the society, Xinjiang officials said on Tuesday.

The centers aim to help people who have been influenced by terrorism and extremism understand their mistakes and the possible public harm they could cause, they said.

"Many people have found suitable jobs that they like after graduation and begun to have considerable income. Furthermore, they have also been helping others to pursue a better life," said Shohrat Zakir, chairman of the regional government. He spoke in Beijing at a news conference on Xinjiang's development held by the State Council Information Office.

Shohrat said the centers provide free classes in the country's common language, impart knowledge of the law and provide vocational skills to trainees with little education who have been influenced by terrorism and extremism and are suspected of minor criminal offenses.

"The centers are never 'labor camps' as they are described by some," Shohrat said. "Our goal is to enable people to see the nature of extremism, which often is disguised as a part of religion, so they won't be lured into activities that endanger people's lives and the unity of the country."

Since most of the trainees have graduated, many teaching facilities are being used to provide short training courses on agricultural skills for local people, Shohrat said.

Since the founding of New China seven decades ago, Xinjiang, home to 25 million Chinese of 47 ethnic groups, has seen profound changes and achieved huge progress.

However, the penetration of religious extremism from overseas led to frequent terrorist incidents in Xinjiang in recent years. Personal safety has become a concern for both locals and visitors to the region, which covers one-sixth of China's territory.

According to the region's de-extremization regulations, governments at the county level or above can set up education facilities, including vocational training centers, to stop people from becoming victims of extremism and even carrying out terrorist attacks.

The centers have never targeted people from particular ethnic groups or with certain religious beliefs, Arken Tuniaz, vice-chairman of the regional government, said at the news conference.

More than 1,000 reporters, diplomats, experts and religious leaders have visited the centers in Xinjiang since last year to see for themselves how the trainees live. Many said the center has proved effective in eliminating religious extremism, which is a common global problem, Arken said.

There has been no terrorist incident in the region for nearly three years thanks to a series of measures adopted to maintain social stability, including the vocational education centers, local authorities said.

The region's economy has benefited from stability. In 2018, Xinjiang recorded 150 million visits from domestic and foreign tourists, up 40.1 percent year-on-year.