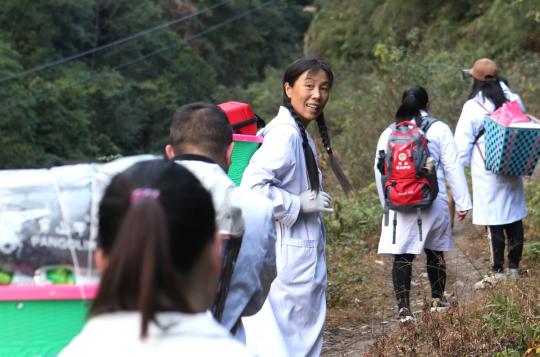 Guan Yanping and her colleagues carry medicine and other devices in baskets on their backs to provide villagers medical services, Jan 12, 2019. (Photo/Xinhua)

Guan Yanping now feels a little accomplished after having worked in Bingzhongluo, a remote township in Southwest China's Yunnan province, for nearly two and a half years.

It is not because she was chosen as a model worker of poverty alleviation collaboration in Yunnan in 2018, or because she was selected as the most admirable medical worker in Jinwan district in Zhuhai, Guangdong province, last year.

"What fulfills me most is the poor health awareness of residents in Bingzhongluo has improved, and I am really happy to see more villagers come to my clinic to seek help whenever they feel sick," said the 51-year-old doctor from Zhuhai.

After graduating from Jilin Medical University in 1991, she worked as a surgeon, gynecologist and obstetrician in Zhuhai. She signed up to work in Yunnan and offer medical services in remote villages in March 2017.

Among people there, she is better known as "basket doctor", because for about 30 months she and her colleagues have carried medicine, electrocardiographs, B ultrasonic and related medical machines as well as other devices in baskets on their backs to provide villagers medical services.

She has climbed mountains, crossed rivers via drawbridges and walked on the narrow winding trails in the cliffs more than 300 times to visit 46 remote villages since then.

"Many local mountainous villages have not yet been linked to the outside world by roads, and ambulances could transport us only to the foot of the mountain," she said.

She was shocked when she arrived in the rural township, located in Gongshan county in the northern part of Nujiang prefecture, near the Tibet autonomous region.

"Local death rates of newborns, pregnant and lying-in women (those who have recently given birth) were three to four times higher than the figures recorded in Zhuhai," Guan said.

What shocked her more at the beginning was that few village patients came to her clinic to seek her help. Local officials had to encourage people to see doctors via loud speakers.

In Zhuhai, Guan usually had to work overtime as there was always a long line waiting outside her office.

"It was a very big contrast," she said. "Many villagers in the rural areas in Yunnan had very poor health awareness. They cared little about their health and never thought of seeing a doctor when they fell ill."

Many local clinics had no more than a doctor. The electrocardiograph, B ultrasonic and related medical machines and devices were found in the clinics' warehouses, covered with thick dust, she said.

"No one knew how to use and operate these machines and devices at that time," she said.

Guan said she was really sad to learn during her first visit to a local mountainous village in 2017 that a man in his 20s had just died of hypertension.

"It was not a single case, and I found that because of excessive drinking and unhealthy diet, many local deaths were actually caused by hypertension and cerebral hemorrhage, and the average age of such deaths was much younger than those in developed areas," she said. "As a medical worker majoring in gynecology, I felt I should do something to help locals and reduce such death rates."

Guan, who was previously asked to work in Yunnan for only six months, then decided to extend her stay to three years.

"It had taken me more than three months to visit all the villages and familiarize myself with the local situation," she said. "So, I asked to work in Yunnan for longer because I needed more time to work in the township and map out a plan to help the locals.

Guan said her family and colleagues supported her wishes to continue working in the province. Liu Baixue, Guan's son, said he fully supports his mother's efforts to realize her dream to help the people in remote areas in Yunnan, although he misses her very much.

"After I told them about my work experiences and the situation in the remote townships in Yunnan, many of my colleagues in Zhuhai also said they would like to come to Yunnan and work in the rural village if they get the chance," Guan said.

In addition to paying visits to village patients, Guan has tried her best to help improve the health awareness of locals, popularize the knowledge of public health and do research work. Over the past two years, she has established a total of 5,143 health files for local patients.

Guan said she hopes that by the time she leaves, she can produce a valuable research report to give to the local government to help improve local public health and basic medical care.