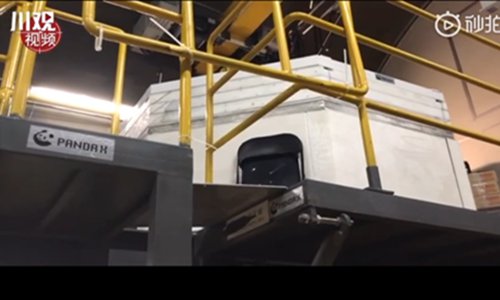 The detector of dark matter is installed in the underground lab. (Photo: screenshot of video posted by Sichuan Daily)

The world's deepest underground lab designed to detect dark matter in Langzhong, Southwest China's Sichuan Province will receive new equipment, which is one of the most important science and technology infrastructure projects of the country.

A ceremony was held on Saturday in a tunnel at Jinping Mountain, the Xinhua News Agency reported.

An online video produced by Sichuan Daily revealed that the Jinping Underground Laboratory is over 300 square meters.

The extreme depth allows for a thick layer of rock to shield the lab and facilities from cosmic rays, Sichuan Radio and Television (SRT) reported.

Jing Mingkun, a researcher at the lab, told SRT the facility would hardly be affected by radiation since the mountain can protect it from high-energy cosmic ray.

The facility to detect and study dark matter is located at the center of the lab and protected with shielding systems, according to Sichuan Daily.

Once the rays are shielded, researchers are able to study dark matter, which would be similar to hearing the voice of a radio announcer when other noise is blocked out, Jing explained.

Due to the extreme difficulty, dark matter has yet to be detected, Jing explained.

Chen Yang, a professor at the school of astronomy and space sciences at Nanjing University, told the Global Times that detecting matter from outer space in the lab has a huge advantage as the earth's surface can absorb and filter noise.

"A Japanese Nobel laureate detected a kind of matter from the supernova in 1987 in an old underground mine," Chen said and explained that if the facility can detect dark matter, it would be a significant achievement.

After completing the project, the lab will offer an environment with near-zero cosmic rays, so it could become a global center for physical research and attract international science experts, the SRT report said.