Where loyalty ran deep for Long March ahead 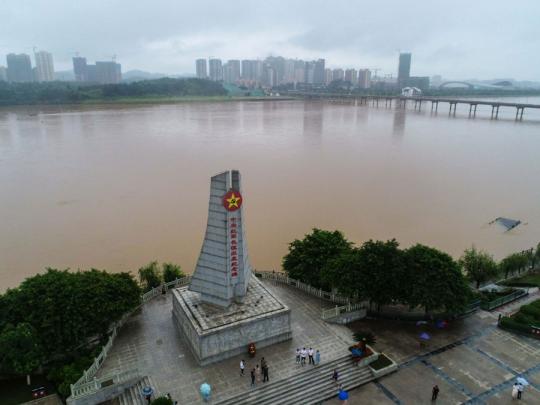 The Monument to the Departure of the Central Red Army's Long March has become a landmark for Yudu county in Jiangxi province. (Photo/Xinhua)

Editor's Note:As the People's Republic of China prepares to celebrate its 70th anniversary on Oct 1, China Daily is featuring a series of stories on the role regions have played in the country's development and where they are today.

In his book Red Star over China, writer Edgar Snow describes the Red Army soldiers who took part in the Long March as "unbeatable" fighters who had demonstrated "sheer dogged endurance".

Snow, an author from the United States, in 1936 witnessed firsthand the soldiers' "ability to stand hardship without complaint" at the makeshift headquarters of the Communist Party of China in Bao'an, located near the city of Yan'an, Shaanxi province,

His book details how the Red Army trekked over mountains and crossed rivers with little food while dodging enemy pursuers in the Long March to Yan'an.

Though it has been more than eight decades since the successful conclusion of the Long March, people will find Snow's description of the soldiers' courage and doggedness no exaggeration if they visit Ganzhou, Jiangxi province, where many Red Army soldiers came from and where the 12,500-kilometer journey officially started.

An 8-meter high wall comprising more than 700 pieces of black marble will impress all visitors to the Xingguo Revolutionary Martyrs' Memorial. On the walls of the monuments are inscribed the names of 23,179 revolutionary martyrs.

"The actual number of martyrs from Xingguo is far beyond the number of names on the wall because survivors failed to remember or even know the names of many of their deceased comrades," said Huang Hong, a guide and interpreter at the memorial.

Some of the names have four Chinese characters instead of three used for most Chinese names. Huang said this is because these soldiers died before they reached 18, an age when they could be given a formal name according to local customs. As they died so young, their family names have to be followed with their childhood names, which usually consists of two or three characters.

Many of the young soldiers belonged to the 15th division of the Red Army, which consisted of members of the Young Pioneers of China and the Communist Youth League. The average age of soldiers in the division was about 18, Huang added.

"For about every kilometer of distance in the Long March, one Xingguo soldier died," Huang explained.

From 1929 to 1934, more than 90,000 Xingguo residents joined the Red Army or fought alongside the army. The total population of the county only stood at 230,000 at the time, said Liu Kailian, honorary president of the Xingguo Red Land Research Society, which concentrates on local communist history research.

He said communism was so widely accepted in Xingguo that one in every 100 natives was a Party member in 1932. All members of the Young Pioneers of China and the Communist Youth League in some townships in the county joined the Red Army. Some youngsters even lied about their age so they could be recruited.

"Many Xingguo people joined the army because they knew that the army fought for the toiling masses and for a new China," he said.

It was not unusual to see mothers and wives support loudly their menfolk's decision to join the army, and escort them all the way through as they went to sign up. In some families, all the sons signed up together, according to the memorial.

Li Meiqun from Lianjiang township, urged her second husband to join the army even though her first spouse, also a soldier, had been killed by the enemy. Li herself placed her infant daughter in the care of a local family and became a guerrilla fighter after the army embarked on the Long March. She was captured by the enemy and died in prison in 1936.

When 86,000 Red Army soldiers gathered in Yudu county, Ganzhou, in 1934 to officially embark on the Long March, the army also had a lot of support from local people.

They collected any large pieces of timber available, including doors and unused coffins, to build five temporary bridges over the 600-meter wide Yudu River to help soldiers cross, said Tan Ying, a guide and interpreter of the Memorial for the Departure of the Central Red Army's Long March in Yudu.

"They built the bridges after darkness fell and dismantled them and hid all the timber so they would not be discovered by enemy aircraft," she said.

She said about 17,000 Yudu soldiers took part in the Long March but only 277 of them lived to see the foundation of the People's Republic of China in 1949.