Tiangong space lab to fall back to earth Friday 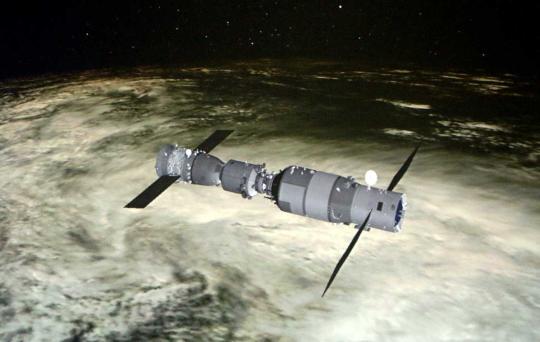 A simulator displays the successful docking of Tiangong II and the Shenzhou XI manned spacecraft on Oct 19, 2016. (Photo by Wang Juan/For China Daily)

China's largest space asset -- the Tiangong II space lab -- is scheduled to conduct a controlled fall today back into Earth's atmosphere, according to the China Manned Space Agency.

All of the space lab's assigned tasks have been finished. It is scheduled to fall out of orbit and reenter the atmosphere under the supervision of ground control on Friday, the agency said earlier this week, without giving a specific timetable.

Most of the spacecraft will burn up during the reentry process, with a small amount of debris expected to fall in a designated secure area in the South Pacific Ocean, according to the agency.

Tiangong II was put into orbit in September 2016 atop a Long March 2F carrier rocket from the Jiuquan Satellite Launch Center in the Gobi Desert. The space lab is 10.4 meters high, 3.35 m in diameter and weighs 8.6 metric tons.

More than 1,000 days into its orbit, Tiangong II has outlived its two-year designed life span. During its orbital stay, the spacecraft carried out four dockings with the Shenzhou XI manned spacecraft and Tianzhou 1 cargo spaceship, enabling China to verify a series of key technologies, such as mid-term life support and in-orbit refueling.

It carried about 600 kilograms of scientific payloads and fulfilled more than 60 scientific experiments and technological tests, gaining a great deal of achievements.

Its predecessor, Tiangong I, was launched in September 2011 and was mainly used to test technologies involved in space rendezvous and docking. Tiangong I fell back to Earth in April 2018 in an uncontrolled manner.

The Tiangong II mission is believed to have gathered significant experience for the construction and operation of the country's future space station.

China plans to start putting together its first manned space station around 2020. It is expected to be fully operational around 2022 and to operate for about 15 years, according to the China Academy of Space Technology.

In 2024, it would become the world's only space station if the United States-led International Space Station is retired that year as planned.