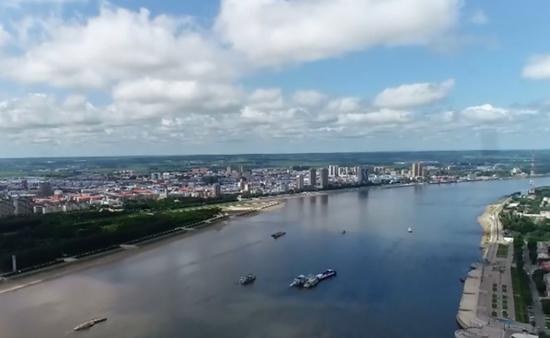 A cross-border cableway spanning the Heilongjiang River will link China and Russia. (Photo/Video screenshot from CNSTV)

(ECNS) -- Construction of the world's first cross-border cableway kicked off at the China-Russia border on Thursday, marking new progress in infrastructure connectivity between the two countries and bringing much convenience to customs clearance.

The cableway spanning the Heilongjiang River, also known as the Amur River, will link Daheihe Island in Heihe City with the Russian city of Blagoveshchensk.

The cableway will be 972 meters long and allow two-way traffic, with cable coaches each capable of carrying 80 people at a speed of seven meters per second. The cableway is designed to have a transport capacity of 6 million people annually. The time for a single-way border crossing will be shortened to less than 10 minutes.

Wang Xu, the chief designer of the project, said construction difficulties include sharp temperature changes in the area and potential impacts on the navigation of the river.

The cableway will become operational in the first quarter of 2021 and is expected to advance tourism in the region.

Qin Enting, secretary of the CPC Heihe Municipal Committee, said Heihe and Blagoveshchensk are across the river from each other, so the cableway will truly connect the two cities and boost cultural and people-to-people exchanges.

A Russian official also said the project will enable people on both sides of the river to better communicate with each other and improve tourism.

China and Russia are increasing border links through several infrastructure projects, including the Tongjiang Railway Bridge, the main construction of which is complete, and the Heihe-Blagoveshchensk road bridge, which will open soon. The plan is to build a comprehensive transportation network in the border area and connect China's Belt and Road initiative with Russia’s vision Eurasian Union.