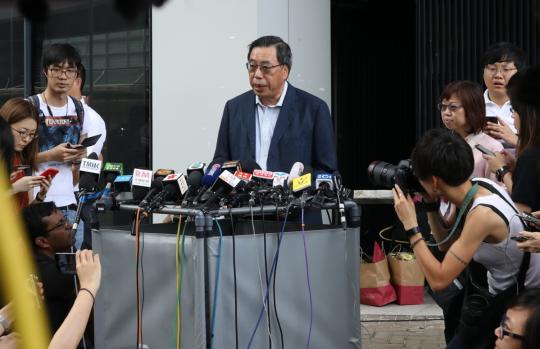 The Hong Kong Special Administrative Region is expected to have a significant setback in approval of issues related to people's lives, due to the forced closure of the city's legislature after damage from a violent break-in by protesters on Monday night, Legislative Council leaders said on Thursday.

The closure will put on hold deliberations on 40 items, most of which affect people's lives, according to legislator and Finance Committee Chairman Chan Kin-por. Items to be discussed by the Legislative Council's Finance Committee involve more than HK$70 billion ($9 billion) in appropriations, including issues of public health and public housing, he said.

Andrew Leung Kwan-yuen, president of the Legislative Council, announced the legislature's temporary closing on Thursday, attributing it to the extensive damage to fire safety, security and communication systems inside the council building. The chambers are to remain closed until October, when a new legislative year starts.

While the effect would be to move up the legislature's summer recess by two weeks, Chan has said he believes that 20 to 30 of those 40 items could have been moved out of committee and approved by the legislature before the recess, had the break-in not forced the closure.

Leung visited the complex with members from the LegCo Commission－which oversees the secretarial affairs of the council－before making the announcement. The LegCo building went through a violent break-in on Monday night, with hundreds of masked protesters occupying and vandalizing it for about three hours.

Leung said it is difficult to find a suitable alternative meeting venue, since a fully functioning council needs to be accommodated by over 1,000 staff members.

By Thursday evening, Hong Kong police had arrested 12 people accused of involvement in storming the LegCo chambers on Monday. Police said arrests corresponded with such offenses as assaulting a police officer, unlawful assembly and possession of weapons.

Among the 40 items to be scrutinized by the Finance Committee, about 20 deal with city infrastructure of different types, while others concern personnel appointments and government salary adjustments, according to a committee agenda list.

Chan said matters he considers to be of great urgency and linked to people's lives include appropriation extensions for several public hospitals and infrastructure projects for public housing.

Chan said he will soon write to Legislative Council members to see if they would agree to scrutinize some urgent livelihood issues through circulation of papers, replacing face-to-face meetings.

However, Chan said that if any member on the committee disagrees with such a special arrangement, it can't be used, according to procedural rules of the committee.

In such a scenario, projects on public housing, for instance, would have to be delayed for at least four months, until late October, Chan said.

"It will no doubt do harm to the livelihood of Hong Kong," Chan said. "I hope lawmakers from different political camps, as well as the entire community, will calm down and give some priority to these critical issues yet to be addressed."

Lam Ching-choi, a member of the Executive Council－the top policy advisory body to the chief executive－who is not a government official, said he regretted that political bickering has become more important than people's livelihoods.

Lam said that if hospital infrastructure projects are delayed, the burden of the public healthcare shortage in Hong Kong will be aggravated.