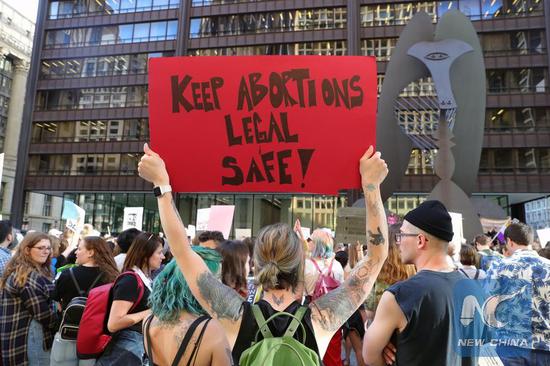 People participate in a protest against abortion ban at Daley Plaza in downtown Chicago, the United States, on May 23, 2019. (Xinhua/Wang Ping)

A federal judge on Wednesday temporarily blocked the enforcement of a state law in midwestern U.S. state of Ohio which would ban abortions after a fetal heartbeat can be detected.

Fetal heartbeat can be detected as early as six weeks into pregnancy, before many women know they are pregnant.

U.S. District Judge Michael Barrett ruled that Planned Parenthood and abortion clinics represented by the American Civil Liberties Union (ACLU) that sued to stop the law "are certain to succeed on the merits of their claim that (the bill) is unconstitutional on its face."

"Today, the court has upheld the clear law: women in Ohio ... have the constitutional right to make this deeply personal decision about their own bodies without interference from the state," Freda Levenson, legal director for the ACLU of Ohio, was quoted by local media reports as saying.

The ruling will allow clinics in the state to continue providing the procedure as a legal faceoff continues.

Republican Ohio Governor Mike DeWine signed the Ohio law in April, after predecessor John Kasich, a fellow Republican, twice vetoed it. The law was slated to take effect from July 11 and violators could have faced up to a year in prison.

Barrett joined the federal court in 2006 after being nominated by then Republican President George W. Bush.