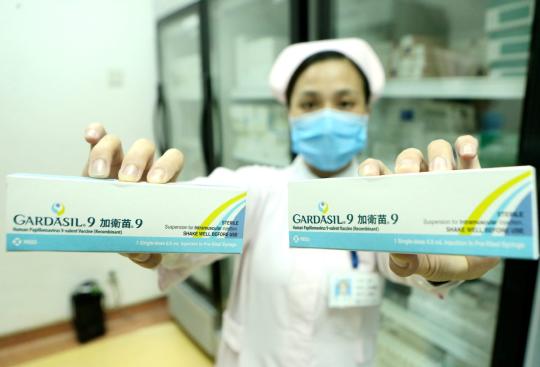 A nurse displays the 9-valent vaccine at a clinic in Shanghai. (Photo/CHINA DAILY)

Injections sought as protection against cancer

This year, Beijing resident Chen Chu finally received her first injection of a vaccine that protects against nine types of HPV, a virus that can cause several types of cancer.

It was late April, and she had been waiting for several years to be administered the 9-valent human papillomavirus vaccine, marketed under the name Gardasil 9.

The HPV vaccine is the world's first aimed at preventing cancer. Multiple valent vaccines are prepared from two or more strains of the same microorganism.

Industry experts attribute the demand for Gardasil 9 to women's fear of HPV-related diseases, especially cervical cancer, but also to the increasing affordability of health services and products.

On the Chinese mainland, the 9-valent vaccine is recommended only for women ages 16 to 26, and Chen said, "I feel very lucky to be able to receive the vaccinations before I became too old."

The vaccine she was given, from United States pharmaceutical company Merck &Co, was made available on the Chinese mainland in May of last year. Outside the U.S. and Canada, the company is known as Merck Sharp& Dohme.

All three types require three shots over a period of six months.

However, since the 9-valent type became available, it has become the most popular and sought-after HPV vaccine in China, despite not being included in the country's free and compulsory vaccination program.