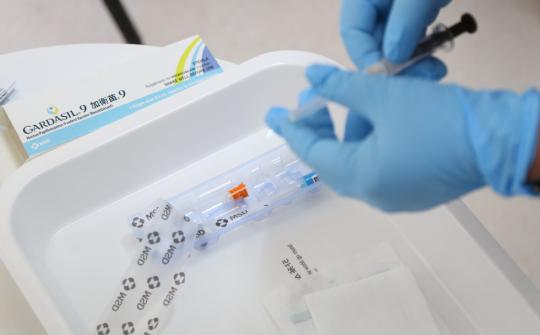 The 9-valent vaccine can reduce the risk of developing cervical cancer by 92.1 percent, according to an article on the National Medical Products Administration's website. QI MAO/YUAN CHEN/FOR CHINA DAILY

The chances of a sexually active woman contracting at least one type of HPV are estimated to be as high as 40 to 80 percent, according to an article on the National Medical Products Administration's website on the granting of conditional approval for the 9-valent vaccine. This approval includes requirements for additional studies and post-marketing surveillance.

Some 80 percent of HPV infections clear up within eight months. Only consistent infection for more than two years from just a few types of high-risk HPV may result in cancers, and only a very few people consistently infected by HPV will eventually develop cervical cancer, the article said.

The 2-and 4-valent vaccines can lower the risk of developing cervical cancer by 84.5 percent, while the 9-valent version can reduce the risk by 92.1 percent, the article said.

It advised people to choose the type of vaccine based on their age and income. On the mainland, the 2-and 4-valent types are cheaper than the 9-valent, costing about 600 yuan and 800 yuan a dose, respectively.

In China, cervical cancer is one of the most common and lethal forms of the disease.

Each year, some 131,500 new cervical cancer cases are reported in the country, and about 53,000 patients die from the disease, accounting for 18.4 percent of the deaths caused by malignant tumors among women in China, according to an article in the Chinese Journal of Practical Gynecology and Obstetrics last year.

Moreover, HPV vaccines have been introduced in China about 10 years later than in some other countries.

However, conditional approval for the 9-valent vaccine was granted on April 29 last year, just nine days into a fast-track review, and the medicine was officially available in Hainan province one month later.

Chen Qiulin, deputy director of the Health Industry Development Research Center at the Chinese Academy of Social Sciences, said, "It is all about fear of cervical cancer, and the huge demand accumulated in all the past years.

"People have known about the vaccines for years, but they were not able to access them in the past. Since they are available now, it is only natural that demand has boomed."

He added that previously, many people traveled overseas to be vaccinated against HPV.

Demand has also increased as incomes have risen, and more people can now afford to spend money on such services as health awareness increases, Chen said.