North China to get relief from heat soon 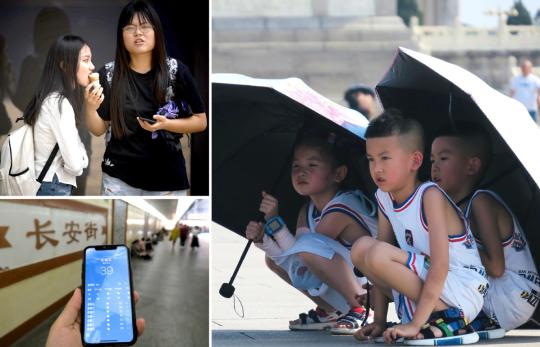 As the temperature soars to about 39 C on Thursday in Beijing (left, below), people have made all out efforts to escape the heat. Some young tourists in Tian'anmen Square choose to hide under umbrellas (right), while others in Sanlitun area resort to ice cream (left, above). (FENG YONGBIN/CHINA DAILY; HAO YI/FOR CHINA DAILY)

North China, including the Beijing-Tianjin-Hebei area, has been hit by high temperatures over the past few days and the heat will last until the weekend, according to the National Meteorological Center.

The observatory has been continuously issuing high temperature warnings since late June, with a yellow alert released on Thursday morning saying that the provinces of Liaoning, Shanxi, Shaanxi, Shandong, Henan, Gansu, the Inner Mongolia and Xinjiang Uygur autonomous regions and the Beijing-Tianjin-Hebei area will experience high daytime temperatures ranging from 35 to 37 C.

Some parts may reach up to 40 C, the center warned, reminding at-risk people to avoid outdoor activities and take necessary action to seek relief from the summer heat.

Monitoring in Beijing showed that the national capital's first "high-temperature day" in July was Wednesday, as temperatures in most parts of the city surpassed 35 C. The city's highest temperature on the day was 41.4 C in Changping district which recorded 42.9 C on Thursday.

Meteorological departments in Hebei province issued a red alert on Wednesday, as high temperatures of more than 38 C occurred in many areas of the province. Red is the most severe weather warning, followed by orange, yellow and blue.

The hot weather in recent days has made life difficult for many people. Li Dongjun, a housewife in Tianjin, said the high temperatures had prevented her from cooking meals for the family for at least three days.

"It only takes a few seconds for sweat to soak your clothes if you choose to cook on such days," said the 43-year-old, adding that she had ordered fast food－which could be delivered to her apartment－as an alternative.

Liu Jian, an employee of an international trading company in Beijing, said he has spent more money on refreshing food items such as ice cream and watermelon slices.

"I bought a quarter or a half melon almost every day over the past week," he said. "Ice cream was also a daily must on these days."

The good news for residents in North China is that the areas affected by high temperatures will become fewer starting from Friday. However, temperatures in southern Hebei, western Shandong, northern Henan, southern Shanxi, central-southern Shaanxi and southeastern Xinjiang will remain above 35 C.

Meteorologists said rain forecast for Saturday in most parts of North China is expected to bring relief from the hot weather. Only a few places in Henan, Shanxi and Shaanxi will continue to endure heat waves until they gradually disappear after Sunday.