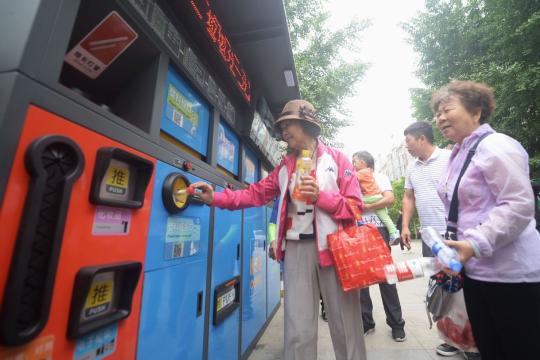 "If the garbage is not sorted, the resident may face a fine of up to 200 yuan ($30)," he said, adding that the penalty will be no less than Shanghai's garbage classification punishment.

Different from the four categories of separating trash in Shanghai, Beijing will use four other garbage classification standards: recyclables, kitchen waste, hazardous waste and other waste, according to Sun.

Some departments and public institutions in the capital have already implemented waste management. Beijing produces nearly 26,000 metric tons of domestic waste every day, and 29 garbage disposal terminal facilities are already operating at their full capacity.

Environmental experts in Beijing welcomed the mandatory trash sorting implementation in Shanghai, saying it will serve as an example for the capital's upcoming revised regulation.

Chang Jiwen, deputy director of the Institute for Resources and Environment at Development Research Center of the State Council, said Shanghai's waste sorting will give reference to Beijing as the public's awareness has been greatly enhanced due to the implementation.

"Some citizens in Shanghai formed the habit of delivering the garbage to recycling stations every day, since the trash bins had been removed," he said. "Beijing can follow Shanghai's suit on mandatory household garbage sorting the same way."

Jiang Jianguo, a professor at Tsinghua University's School of Environment, said there are still lots of challenges if Beijing plans to classify residential garbage.

"Most of the residential garbage didn't have recycling value, but that trash makes up most of the public's garbage," he said. "How to restrict those through legislation remains a question to consider in the future."

Beijing has carried out trash sorting since early 1998, when the Dachengxiang community in Xicheng district became the first neighborhood to classify garbage. At the end of 2011, the city published China's first domestic waste management regulation, which took effect on March 1, 2012.

However, the implementation of trash sorting in Beijing hasn't gone well in the past decade, since mere encouragement is not enough for citizens to change their habits, said Hao Zhilan, director of the urban construction and environmental protection committee, at the Beijing's People Congress meeting at the end of May.

The previous regulations didn't give specific fines for households, companies or institutions that fail to sort their garbage properly.

Yuan Yiyu, a 20-year-old sophomore at the University of International Business and Economics in Beijing, said she started to learn garbage classification this month since the implementation of trash sorting in Shanghai largely drove her passion to learn waste sorting at college.

"I hope to use the garbage classification knowledge more in the future to help better protect our city's environment," she said.