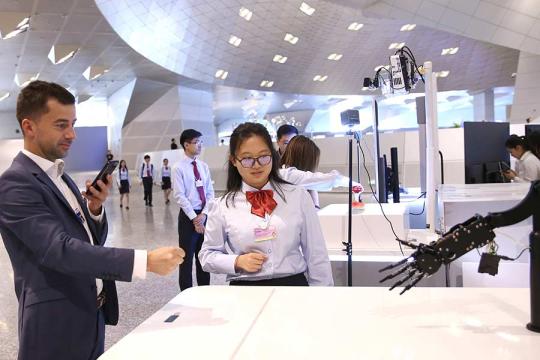 A guest to the Summer Davos Forum in Dalian, Liaoning Province, interacts with a robot on the sidelines of the event on Tuesday. (Photo by Zou Hong/China Daily)

Premier Li Keqiang promised on Tuesday to reinforce existing macroeconomic policies, amid great determination to achieve the $300 billion tax and fee reduction goal, in response to risks accumulating in a slowing global economy.

Letting people have a better life, the government has to tighten its belt because of the rising fiscal deficits, but "we have the solutions", Li said in a keynote speech at the Summer Davos Forum, organized by the World Economic Forum in Dalian, Liaoning province.

Li took tax and fee cuts as the crucial measure to motivate enterprises, which can reinvest the savings into technological innovation and stabilize employment. More measures will be taken to improve the business environment and boost investment and consumption.

"It is substantive progress to achieve the 6 to 6.5 percent GDP growth this year," said Li, adding that the slowing global economy will add downside pressure to China's growth.

Data showed that the world's second-largest economy largely stabilized in the first half, given the still robust industrial production and retail sales. The surveyed urban unemployment rate remained stable at about 5 percent, despite headwinds such as the escalation of trade tensions with the United States, according to data from the National Bureau of Statistics.

In face of the external challenges, Li called for the international coordination of macroeconomic policies, noticing that some countries have cut interest rates or released signals of carrying out quantitative easing.

"We are all passengers in the same boat," he said. "We should assess the results of previous quantitative easing and excessive money issuance－the policies for tackling the global financial crisis."

Li said China would avoid competitive devaluation of the renminbi, and keep the currency's exchange rate "at a reasonable equilibrium level." The monetary policy will remain prudent, without aggressive easing.

The authorities will not take measures that could have a negative impact on future growth, and keep seeking new growth potential, according to the premier.

It is time for Chinese enterprises to reconsider the changes in the business environment at the moment, as the trade difficulties may continue this year, Ning Gaoning, chairman of Sinochem Group, said at the Summer Davos Forum.

"With warnings from the trade disputes, Chinese companies have to change their modes of business operation, focusing on technological upgrading and long-term strategies," Ning said, adding that he was optimistic over the country's economic growth this year.

For small-and medium-sized enterprises, Premier Li said their financing costs will be reduced through cutting the banks' reserve requirement ratios and lowering the actual lending rates.

"A fair competition environment should be built for small-and medium-sized enterprises, and supportive measures will be launched. The financing situation should be remarkably improved this year," he added.

One of the key issues to improve SMEs' access to bank lending is to reasonably price the loans based on risk assessment, said Huang Yiping, deputy dean of the National School of Development at Peking University.

Huang said further monetary policy easing, if necessary, will help to achieve interest rate liberalization. In addition, the transformation of private business, from a resource-driven to an innovation-led growth mode, will boost China's economy. The private sector accounts for around 70 percent of the country's growth.

The truce in the Sino-U.S. trade dispute and their decision to go back to the negotiation table will support the near-term economic growth and reduce risk-aversion sentiment in the market, said Michael Taylor, managing director and chief credit officer for Asia-Pacific at Moody's.

"We expect China will continue to ease policy in an effort to offset the impact of the existing tariffs and that major central banks will maintain their bias toward more accommodative policy," Taylor added.