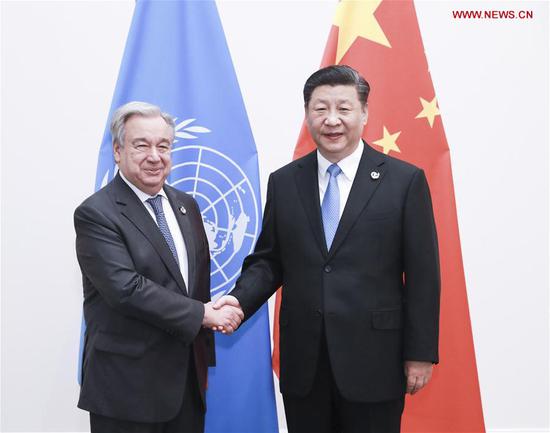 Chinese President Xi Jinping said here Friday that the Gulf region is now in a very sensitive situation and standing at a crossroads of war and peace.

Xi made the remarks when meeting with UN Secretary-General Antonio Guterres ahead of a summit of the Group of 20 (G20) major economies in the Japanese city of Osaka.

Noting the increasing complexity and turmoil in the international situation, Xi said the Gulf region is in an especially sensitive situation and standing at a crossroads of war and peace.

China always stands on the side of peace and opposes war, Xi said, calling on all sides to remain calm and exercise restraint, promote dialogue and consultation, and jointly safeguard regional peace and stability.

The G20 Osaka summit should fully consider the need of global development and deliver correct signals to the world, Xi said.

Xi said the Chinese side appreciates the secretary-general's efforts to promote international cooperation in addressing climate change, and is willing to push for positive outcomes of the UN Climate Action Summit.

For his part, Guterres said the international situation is now at a critical moment, as tensions are emerging in the trade area and the Gulf region, and the world is facing insufficient willingness to promote multilateralism and follow laws and rules.

The UN chief said the China-proposed Belt and Road Initiative is of great significance to boosting global development, especially the development of Africa.

Guterres said he looks forward to and supports China offering more leadership in international affairs, adding that the world body will make joint efforts with China to better enable global governance to play its due role and turn the practice of multilateralism into the mainstream in the international community.