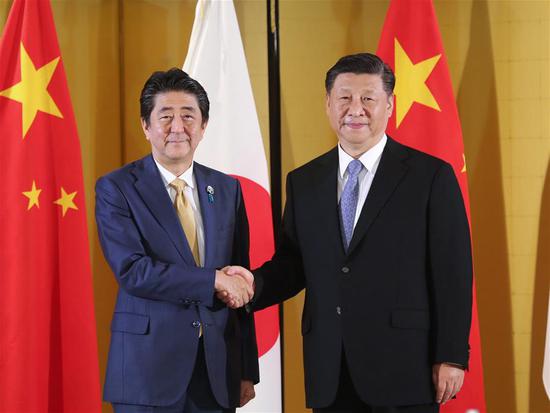 The consensus was reached during a meeting between Xi and Abe ahead of a summit of the Group of 20 (G20) major economies slated for Friday and Saturday in the Japanese city of Osaka, Wu Jianghao, director-general of the Department of Asian Affairs of the Chinese Foreign Ministry, told reporters.

China and Japan have enjoyed a generally good momentum in the development of bilateral relations, Wu said, adding that there are also divergences between the two countries.

Both leaders agreed that China and Japan should focus on consensus while managing differences, said Wu.

Among the consensus, Xi and Abe spoke highly of the sound momentum in the development of China-Japan relations and agreed that as both countries have entered a new era of development, joint efforts are needed to build bilateral relations that meet the requirements of the new era.

While the world is undergoing profound changes unseen in a century, the two leaders saw fresh opportunities for developing bilateral relations as mutual interests and common concerns between the two countries are increasing day by day.

Secondly, the two leaders reiterated that their countries will hold fast to various principles stipulated in the four political documents between China and Japan and implement the political consensus that they are cooperative partners who never pose a threat to each other.

The two countries will also uphold the spirit of replacing competition with coordination and continue to push forward the China-Japan relations on the right track.

Abe, on behalf of the Japanese government, invited Xi to pay a state visit to Japan in the spring next year. Xi agreed in principle to the invitation. The two leaders have instructed their respective foreign affairs departments to maintain communication on the timing of the state visit.

Fourthly, the two leaders agreed to further deepen the convergence of interests between their countries and strengthen mutually beneficial cooperation in a wide range of areas such as science and technology innovation, protection of intellectual property rights, trade and investment, finance, medical and health, old-age care, energy saving and environmental protection and tourism.

The Japanese side sees the Belt and Road Initiative as a promising idea for linking diverse regions, while China welcomes Japan to actively take part in the high-quality construction of the Belt and Road.

The two sides will continue to strive for solid results in third-party market cooperation.

China and Japan support their respective enterprises to expand mutual investment and pledge to provide a fair, non-discriminatory, and predictable business environment for the other's enterprises.

Sixthly, the two leaders agreed to actively carry out friendly non-governmental exchanges between China and Japan, so as to increase mutual understanding and strengthen the people-to-people bond.

The two sides should take the opportunity of the ongoing China-Japan Youth Exchange Promotion Year to actively carry out various exchange activities such as study tours.

In this respect, China and Japan should strengthen communication and cooperation in security, actively promote the building of constructive bilateral security relations and gradually set up solid strategic reciprocity and mutual trust.

The two leaders agreed to further strengthen dialogue in diplomacy and security.

The two sides will continue to promote the implementation of the principled consensus on East China Sea issues and make joint efforts to safeguard peace and stability of the East China Sea, so as to turn it into a sea of peace, cooperation and friendship.

Ninthly, the two leaders believe that China and Japan, both important Asian countries and major global economies, should jointly safeguard multilateralism and the free trade system, actively steer regional integration, advance the building of an open world economy, and promote the common development of all countries.

The two sides agreed to make the G20 play its important role in promoting the steady development of the world economy and improving the global governance system.

Tenthly, Xi and Abe believe that China and Japan should actively fulfill their international responsibilities, face various global challenges shoulder by shoulder, and strengthen communication and coordination on such global affairs as development aid, climate change, arms control and disarmament as well as health care, so as to jointly make contributions to world peace, stability and development. Enditem