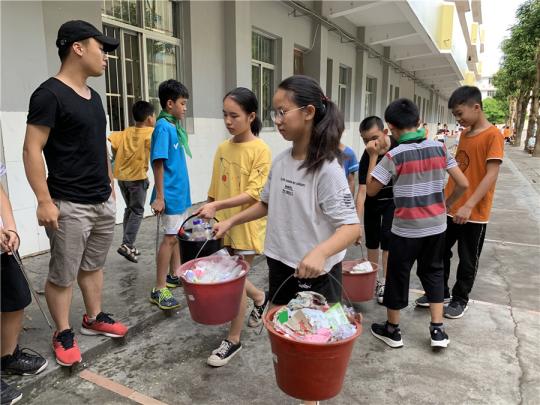 Though waste sorting has yet to make notable progress nationwide, it has been successful in Hengxian, a county with a population of 1.3 million in the Guangxi Zhuang autonomous region.

Once, the county's garbage was sent directly to orchards for use as fertilizer. However, as local living standards rose, orchard owners began refusing the waste, which contained increasing amounts of plastic and glass. That resulted in the county's urban area being "surrounded by garbage, plagued by rivers full of sewage and befouled by bad smells", said Huang Li, a sanitation worker for two decades.

She said the ever-rising volume of trash quickly overwhelmed a 0.2-hectare dumping site, and sanitation workers were often tasked with dumping garbage in remote rural areas at night.

The situation quickly became fraught. "After learning that urban sanitation workers were dumping waste, many rural residents armed themselves with sticks and shovels and kept a constant watch for their arrival," Huang recalled.

Things only changed when the International Institute of Rural Reconstruction, a countryside development organization headquartered in the United States, and the Hengxian government started a garbage-sorting program in the county. Before the launch of a three-month pilot in two urban streets that contained 236 households in March 2000, about 10 trucks-worth of garbage was removed, she said.

For the pilot, residents were asked to sort household garbage into two categories - kitchen waste and other trash. Before the non-kitchen waste was sent to landfills, it was further sorted by sanitation workers. Now, every program in Hengxian is based on the same model.

To encourage participation, small gifts were given to residents who sorted garbage efficiently, and the sanitation workers refused to collect unsorted trash to punish people who didn't participate.

Liang Ruobing, headmaster of Liuming Primary School in Hengxian, said his school holds themed garbage-sorting classes every month. Students are appointed as monitors to check if every class has sorted its trash correctly, and those deemed to have failed are docked points in an assessment system.

"The school has also attempted to help students develop the habit of minimizing the amount of trash they generate," he said, adding that a lack of trash cans at the school emphasizes that point.

Zhang Lanying, who worked as project coordinator for the International Institute of Rural Reconstruction, the US organization, attributed Hengxian's success to the effective mobilization of the people and respecting their opinions.

She said the institute arranged for students to conduct surveys on the streets and at restaurants and farm produce fairs to learn about people's ideas regarding garbage sorting, their willingness to participate and their preferred participation method.

Strong support from the county government also resulted in great synergy. Local agricultural, environmental and education authorities and schools were all mobilized to contribute, said Zhang, who is now an associate researcher for the Institute of Rural Reconstruction of China at Southwest University in Chongqing.

She said a six-year environmental training project the US organization conducted in Hengxian before the pilot program was launched laid a good foundation.