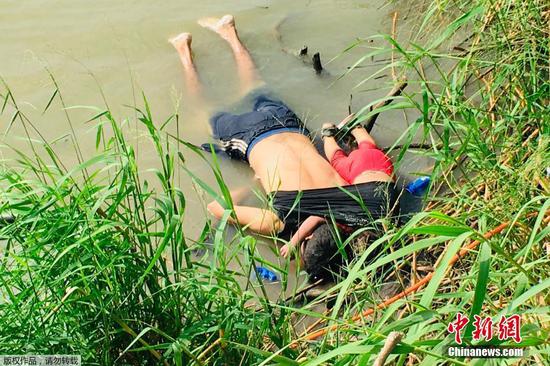 The bodies of Salvadorian migrant Oscar Alberto Martinez Ramirez and his daughter Valeria are seen after they drowned in river while trying to reach the United States in Matamoros, Tamaulipas state, Mexico, June 24, 2019. (Photo/Agencies)

The UN Refugee Agency (UNHCR) said on Wednesday it was "deeply shocked" to see the "heartbreaking photo" of the drowned bodies of a father and his 23-month-old daughter from El Salvador washed up on the banks of the Rio Grande, which separates the United States and Mexico.

While the details remain uncertain, it is clear, said the UNHCR in a statement, that the circumstances that led to the tragic death of Oscar Alberto Martinez Ramirez and his daughter Valeria are "unacceptable."

The UNHCR noted that "less than four years after the world witnessed the lifeless body of a Syrian refugee toddler, Alan Kurdi, washed up on the shores of the Mediterranean", the world is again "confronted with powerful visual evidence of people dying during their dangerous journeys across borders."

"The deaths of Oscar and Valeria represent a failure to address the violence and desperation pushing people to take journeys of danger for the prospect of a life in safety and dignity," UN High Commissioner for Refugees Filippo Grandi said.

"This is compounded by the absence of safe pathways for people to seek protection, leaving people with no other choice than to risk their lives."

The UNHCR said that it continues to call on all countries in the region to take immediate and coordinated steps to prevent further tragedies like this from occurring.

The refugee agency said it had also offered proposals on ways to improve and strengthen the processing of asylum-seekers in the United States, including conditions in detention.

"We remain ready to support all governments in the region in ensuring that any person in need of international protection receives it promptly and without obstruction," the UNHCR said.