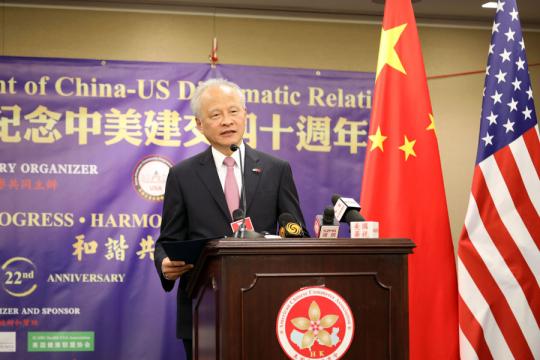 The upcoming meeting between the presidents of China and the United States in Japan has raised hopes for the two countries to narrow differences, but concrete efforts are still needed to reach a mutually beneficial deal, officials and experts said.

President Xi Jinping and his US counterpart Donald Trump agreed in a phone conversation on Tuesday to meet on the sidelines of the Group of 20 Summit to be held in Osaka next week.

Foreign Ministry Spokesman Lu Kang said at a regular news conference on Wednesday that a mutually beneficial accord between China and the United States not only conforms to the aspirations of the peoples of both countries, but also meets the expectations of international community.

Xi agreed with Trump to have the two countries' trade teams maintain contact on how to solve the dispute, but he stressed that the two sides should solve their problems through dialogue on an equal footing, with the key being to accommodate each other's legitimate concerns. He also urged the US to treat Chinese companies in a fair manner.

Chinese Ambassador to the US Cui Tiankai said in Washington on Tuesday that differences do not necessarily lead to confrontation for China and the United States, and that the two countries should not allow disputes and disparities to define their relationship.

He said that the China-US relationship will remain one of the most important bilateral relationships in the world. They have far more common interests than differences, their cooperation far outweighs frictions, and cooperation is the only right choice for the two countries, he added.

Observers said the two presidents have put the brakes on the escalating trade frictions but hurdles remain for the two countries to clinch a deal.

The meeting the two leaders agreed upon sends a positive message to the world, which demonstrates that both countries have a stronger readiness to find a solution to the trade friction through negotiations and consultations, said Ruan Zongze, executive vice-president of the China Institute of International Studies.

Ruan said that narrowing differences will not happen overnight, but the head-of-state diplomacy can play a significant role.

US Senator Chris Van Hollen of Maryland said the current moment is one of "increasing tensions" between the United States and China.

"We need to work out our differences with mutual respect, and make sure that we recognize that it would be a big mistake if China and the United States were to somehow end up in a hugely adverse adversarial relationship," he said.

Both will be better off if they maintain a strong dialogue and find a way forward where both countries can continue to prosper, he said. "We are competitors in many ways, but competitors can make each other better in many ways," Hollen said. "What we do not want, in my view, is to fall into some kind of new Cold War going forward."

The US Trade Representative's Office was holding hearings starting on Monday in which US business executives pleaded for officials to spare them from the effects of Trump's threat to impose tariffs on another $300 billion in Chinese imports, with levies up to 25 percent, on top of the $250 billion worth already targeted.

Zhou Yuan, a senior researcher at the Oriental Think Tank in Beijing, said China and the United States are in an interconnected and intertwined global village, and unilateralism can only lead to conflicts. A trade war, by its nature and throughout history, has been a lose-lose proposition, Zhou said.