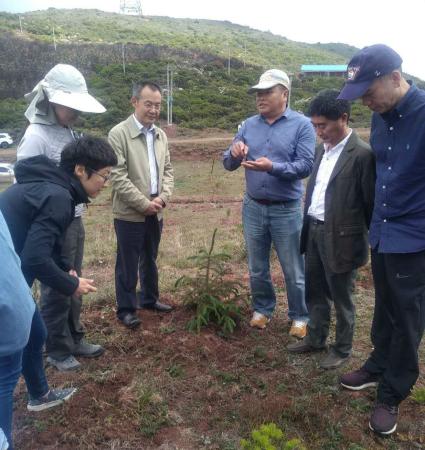 Officials from the forestry sector in Sichuan province and Swiss pharmaceutical company Novartis Group examine seedlings in a project site in Zhaojue county, Sichuan province in late May. (Photo by Liu Ying / For China Daily)

Visitors to some parts of the Liangshan Yi autonomous prefecture in Sichuan province, well known as a habitat of the giant panda, are often left impressed by its vast expanses of firs and spruces.

Planted around ten years ago, the trees are not particularly tall, with the biggest only being about the height of an adult man, but to people who know much about the prefecture, even this is a miracle.

Located at high altitude, Liangshan is known for its harsh natural conditions and the survival rate of seedlings is very low.

In the first few years after they are planted, they only grow a few centimeters each year, and then increase by 40 to 50 centimeters every 12 months after those early years, says Tong Wei, chief of the Ecological Protection and Restoration Department of Sichuan Forestry and Grassland Bureau,.

From the 1950s to the 1980s, the local economy mainly depended on logging and selling trees but as no replacements were planted, land was degraded.

The project will last 30 years and covers five counties and three nature reserves in Liangshan, where land was degraded as a result of decades of logging from the 1950s to the 1980s.

Since then, the project has overcome many difficulties, such as high altitude, poor natural conditions and conflicts between forestry and animal husbandry, planting 21 million seedlings of firs, spruces and other species on 4,095 hectares of land.

As an initiator and main participant of the project, Markus Lehni, environmental sustainability coach and adviser to Novartis HSE, has traveled many times from Switzerland to the mountains in Liangshan to see how trees grow.

During his recent visit in late May, he looked at the lush firs and spruces and said emotionally:" I believe that in the near future, these trees will grow into towering ones and the giant panda will come back."

Afforestation/Reforestation on Degraded Lands in Southwest China is the first afforestation and carbon reduction project in China implemented with direct cooperation with a foreign firm. Nearly one hundred million yuan ($14 million) has been invested in the project, $8.5 million of which has come from Novartis, Tong said.

The project has brought direct economic income and employment opportunities to local villagers. They have received more than 26 million yuan in labor income through participating in land preparation, tree planting and replanting and fencing construction, and more than 13 million yuan in nursery stock cultivation in the project area. The per capita income of villagers in the project area has increased by about 2,160 yuan, Tong said.