Relief underway to deal with floods 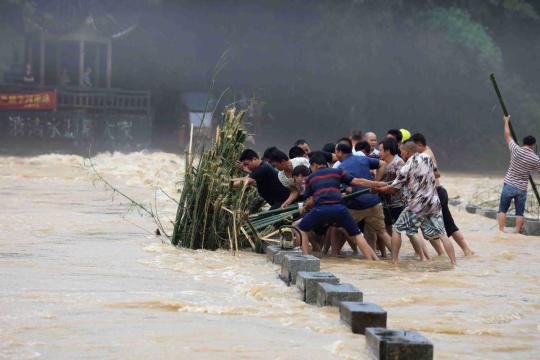 Disaster relief personnel and villagers work together to remove debris stuck near a bridge amid flooding in Liuzhou, the Guangxi Zhuang autonomous region, on Monday. (TAN KAIXING/FOR CHINA DAILY)

China has organized emergency rescue teams involving almost 1.5 million people and prepared more than 600 million yuan ($86.8 million) worth of supplies as it combats major floods that are threatening to hit a wider region this week, according to the national flood control authority.

"Generally, flood control and relief work is facing a complicated and grim situation this rainy season. It's an arduous task to ensure safety all through the season," said Ye Jianchun, secretary-general of the State Flood Control and Drought Relief Headquarters, during a news conference organized by the State Council Information Office on Tuesday.

Many areas in South China are receiving more rainfall than in years past, and the Huaihe River, some areas in the Pearl River basin and the middle and lower reaches of the Yangtze River may potentially be affected by major flooding.

Ye said landslides and debris flows are more likely to occur in mountainous areas in western parts of China, especially in Sichuan and Yunnan provinces. As part of the headquarters' preparations for flood control and relief this year, it has trained about 240,000 local officials for the task. In addition to 360 national emergency rescue teams composed of almost 140,000 people, various local government bodies, including water resources, transportation and power supply authorities, also have 1.1 million rescuers at the ready, he said.

Flood control authorities at various levels and other government bodies have so far organized drills for flood control efforts on numerous occasions across the country, he added.

The National Food and Strategic Reserves Administration has prepared emergency supplies worth 615 million yuan ($89 million) in 29 of its warehouses, Ye said.

Many areas in South China are being lashed by major downpours.

In the Guangxi Zhuang autonomous region, weeklong torrential rains have triggered floods in six cities and 32 counties, leaving nine dead and impacting over 360,000 people, according to the region's emergency management department.

The floods have toppled or damaged more than 1,300 homes and driven nearly 17,000 people to evacuate.

In Heyuan, Guangdong province, seven people were killed and one was missing as of 10 am Tuesday, after torrential rains toppled homes, damaged roads and crippled telecom facilities.

All schools in Heyuan were suspended on Monday afternoon until further notice, the city government announced in a statement.

Sixty-four monitoring stations recorded over 100 millimeters of rain and eight stations saw double that amount in Heyuan between 8 pm Sunday and 2 pm Monday, according to the city's meteorological service.

"We were moving goods, but not fast enough, as muddy water rushed in. I have been here for a decade and never saw anything like this. It was really serious today," said a woman in Longchuan county, whose store was flooded.

Meizhou, another Guangdong city, was hard hit by heavy rains.

A 33-year-old pregnant woman in the village of Zhukeng, Daping township, Meizhou, was killed when her home collapsed in a mudslide on Monday.

Guangdong is expected to see sustained heavy rains until Friday, with strong winds in some areas.

China's meteorological authority has issued a blue alert, the lowest in a four-tier warning system, for heavy rains in effect for Tuesday and Wednesday.

According to the national observatory, torrential rains affecting many areas in South China are expected to continue.