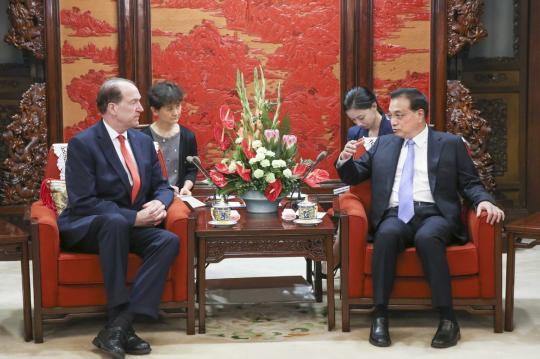 Li said in a meeting on Tuesday with World Bank President David Malpass that the country will bring its business environment more in line with market principles, international standards and the rule of law as part of efforts to promote high-quality development.

He noted China's cooperation with the World Bank, which is in keeping with its steps in reform and opening-up and benefited the country's growth. The global landscape is complex and fluid, and the Chinese economy is facing various risks and challenges, he said.

Further cooperation between China and the World Bank will help promote poverty reduction, narrow the gap between developed and developing countries and enable sustainable development, he said.

As a participant in, architect of and contributor to the current international economic and financial system, China stands ready to deepen cooperation with the World Bank and jointly promote global development and prosperity, he said.

China, the world's largest developing country, is willing to fulfill its due international responsibilities and obligations while ensuring its own development, he added.

Li also urged China and the World Bank to deepen their cooperative partnership, jointly send out a positive signal of adhering to globalization and push forward global development and prosperity.

Malpass, who was selected as the 13th President of the World Bank Group in April, lauded China's achievements in economic growth.

He said that the Chinese premier has been personally involved in the innovation side of the Chinese economy as well as environmental improvements. "We look forward to working with you on developing the issues, both in China and globally," he said.

The World Bank recognized China's efforts in improving its business environment last year in its annual Doing Business 2019 report, in which China rose to a global ranking of 46 among 190 economies, up from 78 the previous year. The report, released in November, said China's reforms in areas including cutting administrative red-tape earned the country a spot in this year's top 10 global most-improved.

Malpass also met with Yi Gang, governor of the People's Bank of China, the country's central bank, on Tuesday.