Let's think about ARM's Huawei ban the other way around.

ARM Holdings, the designer of the underlying architecture of basically all smartphone cores, has paused its partnership with Huawei, the world's second largest phone maker.

Many say the Shenzhen-based telecom giant will fall in no time because no major smartphone company can escape from ARM's reign.

Qualcomm's Snapdragon, Apple's A series, Samsung's Exynos and many more, all belong to the same team called the "ARM architecture," powering over 90 percent of all smartphones on Earth.

Without ARM's help, Huawei will have to invent its own mobile CPU architecture, an effort that chip giant Intel tried and failed years ago.

Intel applied its computer CPU architecture "x86" to the smartphone world back in the 2000s, with Asus' ZenFone to be the main product. 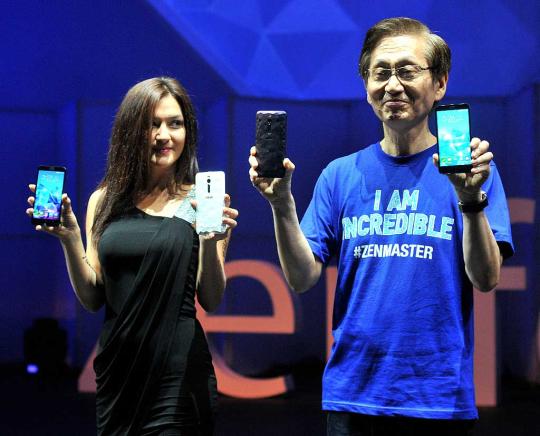 Jonney Shih (R), chairman of Asus, during the launching of New Zenfone Smartphones in a function at New Delhi, August 6, 2015. /Xinhua Photo

But the project was frozen around April 2016 as major smartphone makers sided with ARM instead.

If Intel can't pull it out, how can we expect Huawei to do it?

It's still too early to say that ARM has dropped Huawei.

Though ARM has confirmed pausing the partnership, the joint venture ARM China is still trying to turn it around.

In a statement to the media, it said, "ARM China sees HiSilicon, our long time partner, as very important. We are looking for a solution within the law and the rules."

Huawei also responded by saying, "We value our close relationships with our partners, but recognize the pressure some of them are under, as a result of politically motivated decisions."

"We are confident this regrettable situation can be resolved and our priority remains to continue to deliver world-class technology and products to our customers around the world," a Huawei spokesperson added.

One of the reasons for ARM to keep Huawei around is its server business.

ARM is the king of CPU architecture in the smartphone world, but it's not the case in network infrastructure and cloud computing. By the end of 2018 the company has only 4 percent of the data center/cloud market with a market value of 20 billion U.S. dollars.

ARM said infrastructure is an "expanding opportunity" in its 2018 Q4 roadshow slides. The company wants to expand to the server market as the smartphone CPU market slowly reaches its cap. 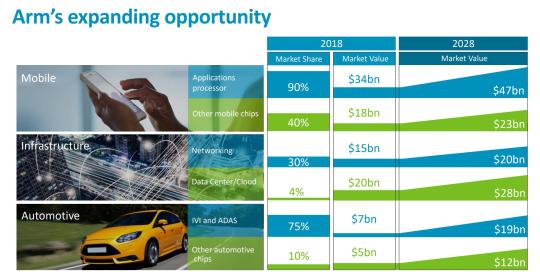 This is where Huawei comes in. The Chinese company has been building ARM-based server chips for years and the latest "Kunpeng 920" is the fastest as of January 2019.

The chip has been put into Huawei's TaiShan server, which Huawei claimed is the best-performing ARM server in the market now.

So Huawei has the potential to lead ARM's venture into the server business. Cutting it loose now is reducing the possibilities of ARM's strategic future.

It's still unknown to the public how ARM and Huawei will save the day.

Chances are ARM can negotiate with the U.S. government to find a way out of the ban.

Another possibility is to only authorize Huawei to use non-U.S. technologies. Since ARM Holdings is a British company owned by Japanese telecom giant SoftBank, there may be some architectures that can be sold to Huawei without violating any U.S. rules.

If ARM is completely blocked from doing business with Huawei, the Chinese company can still use the already-bought architectures like the ARMv8, which Kunpeng 920 and Kirin 980 are based on.

Huawei already has the ability to change the architecture to suit its own need. With enough resources, the company may be able to develop a new variant of ARM architecture.

Huawei may also turn to other royalty-free architectures for help, like RISC-V and MIPS. But obviously it'll take years if the company has never prepared for ARM's ban.

At the end of the day, if Huawei manages to create a new smartphone architecture, it'll bring more competition to the market and ultimately benefit the users.