Zhu Ting returns to China in preparation for Tokyo 2020

"Zhu Ting has been working for Vakifbank Club for three years since the 2016/17 season. Now, as China's preparation for the 2020 Tokyo Olympics, she will leave our family for one year."

"We are grateful to the thousands of fans in China. Thanks to Zhu Ting's effort to our team and our hearts will always stay together. We will meet again!" 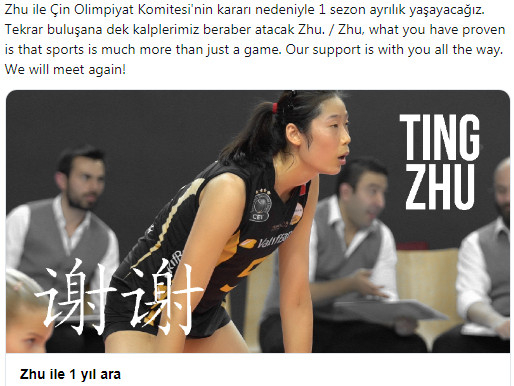 Zhu started volleyball career in her hometown, Henan Province since 2008. In 2013, she played for Guangdong Evergrande and claimed a bronze medal at 2013 FIVB World Club Championship. After a short journey in Guangzhou, Zhu came back to Henan Huawei and played here until 2016 and moved to Turkey to play for VakifBank from 2016/17 season till now.

"I had a good impression in Turkey league since this is my first time to play abroad. VakifBank are good team, with nice coaches and athletes," said Zhu.

"I would like to say thank you to VakifBank, which brings me lots of things in the past three years. I am happy to play in such a professional league. Thank you so much! "

Flashing back to the FIVB Volleyball Women's Club World Championships last year, the game between hosts Zhejiang and Vakifbank marks the first-time return of Chinese national team captain on her home soil. The cheers from the audiences made her feel at home despite she represented a Turkish club. Zhu, who helped VakifBank to become the first team to win the Women's Club World Championship in the third time, ended as the tournament's top scorer and was awarded MVP.

Zhu's return to the Chinese volleyball league has been confirmed while her next station is still uncertain. Beijing, Tianjin, Shanghai and Guangdong set to be the candidates as the 25-year-old holds the highest salary in the Turkish league.

"I will be back soon, but no idea on where to go," Said Zhu.

Preparing for the Tokyo Olympics next year comes to a top priority for the MVP player as she sets to think about how to ensure the physical condition in the domestic league.