Investing in a connected future 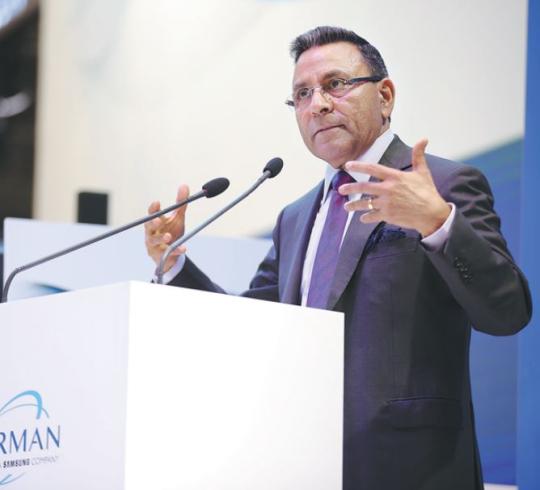 At the helm of one of the world's largest providers of connected technologies, Paliwal has made concerted efforts to deliver a bouquet of products and solutions with advanced technologies. They are for the automotive, audio and enterprise sectors.

At the recent Shanghai Auto Show, the US-based multinational launched 5G-ready telecommunications control unit (an embedded onboard system that controls vehicle tracking) and digital cockpit (which is designed to enable autonomous driving in the future).

"China demands the best and most cutting-edge technologies," Paliwal said. "If you want to succeed in China, bring here the best technology, top leadership and top investment."

And that's exactly how Harman wins hearts in the market. Since its establishment in 2009, Harman China has achieved rapid growth. It reaped more than $1 billion in sales in the China market in 2017, up from about $100 million almost a decade ago.

Paliwal has been more than satisfied about the business performance in China. Harman's growth in China is much better than in other markets, he said. "When I say 'grow', it's not just the revenue, but also the innovation. One-third of our technology development in the world is coming to China."

Even so, the leader has an ambitious agenda for future growth. Under Harman's 2025 growth plan, he projected that the company's annual sales in China could exceed $2 billion in the next five years - which would nearly double last year's sales.

"For the automotive sector, we are investing in cellular technologies and 5G deployment. That will be very important for the next few years," Paliwal said. And he promised to keep investing in the market as needed.

In his colleagues' eyes, Paliwal is a "visionary leader" who firmly believes and proactively invests in the future.

When automakers were racing to deploy autonomous driving, Harman launched the digital cockpit solution to give the revolutionary technology dimensions of reality.

At the Shanghai Auto Show in April, Harman entered into a strategic partnership with Beijing Electric Vehicle Co to bring the scalable solution to market.

The system's forward-looking features, such as smart driving applications and platform design, aim to improve user experience and evolve alongside the autonomous driving technology, eventually leading to a truly hands-free driving experience, the company said.

"BJEV was the first customer in the world for us to launch (the digital cockpit)," Paliwal said. "That's because Chinese car companies are bold, really. They want to go with the best and loudest technology."

To get a head start in the 5G era, Harman launched its 5G-ready telecommunications control unit, or TCU, at the Shanghai Auto Show.

The technology provides scalable mobile network connectivity for cars using either the current 4G network infrastructure or the faster 5G network of tomorrow. The 5G-ready TCU will be available for 2022 vehicle production in a variety of configurations, according to the company.

Underscoring the recipe for success in China, Paliwal said: "The No 1 thing is to start with top leadership to run the operation in China and better understand Chinese culture, Chinese policymakers and customers.

"Business is business, but in the end we understand the clients' challenges. We understand their cost pressure and speed pressure. And we're responding to their challenges better than many of our competitors.

"I think this is the secret of us growing 35 percent year-on-year to over a billion dollars."

As for the consumer goods sector, the company has dedicated itself to customizing audio solutions for the market, as Chinese customers are "digitally savvy and most demanding".

Commenting on China's opening-up endeavor, Paliwal said: "We have taken advantage of all reforms the Chinese government has made in the last 10 years.

"And I'm very optimistic for the next 10 years. More would be done and more technologies would be protected."

Harman Automotive Electronic Systems (Suzhou) Co Ltd is the multinational's first production plant in China. After 10 years of development, it became Harman's largest production and research and development base in the Asia-Pacific region, doubling the previous production capacity.