Startups step on it to get fundraising on track for production 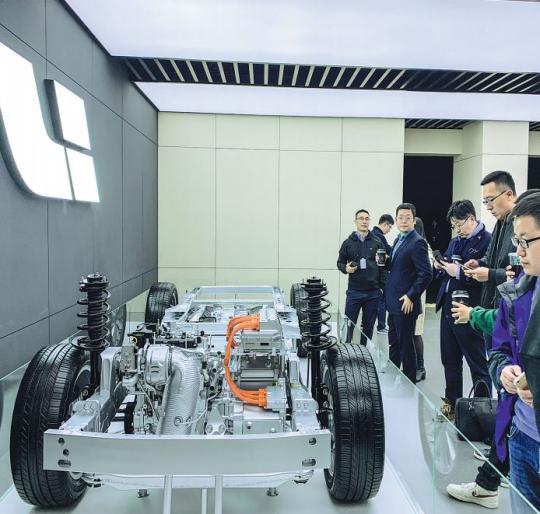 China's new energy vehicle startups are upping their fundraising efforts in preparation for kick-starting production of their models.

CHJ Automotive is seeking to raise $300 million to $500 million in its latest funding round, Reuters said citing two people with direct knowledge of the matter.

The money will be mainly used to finance mass production of CHJ's first consumer model, Leading Ideal One, as well as for research and development, according to Reuters.

The startup was valued at around $2.5 billion ahead of the new funding round and has hired Goldman Sachs to advise on the fundraising. Both the startup and the bank declined to comment.

The four-year-old company obtained a manufacturing license last year and plans to start mass production of Leading Ideal One, a seven-seat SUV, in its wholly-owned plant in Changzhou, Jiangsu province in July, one of the people involved said.

The company opened five retail centers in a few Chinese cities in May, with eight more expected to open in the third quarter, which has raised demand on cash flow as well.

Like CHJ, several other startups are in need of cash as they rev up preparation for production.

Byton, whose co-founder Carsten Breitfeld quit suddenly quit in April, said it has raised $820 million so far and will finish its latest round of Series C funding in the first half of the year.

"We have just one goal this year: to start production by the end of the year," another cofounder Daniel Kirchert told reporters late last month.

Byton is building a plant in Nanjing, Jiangsu province with a planned annual capacity of 150,000 units in its initial phase.

It told Reuters in April that it has received over 50,000 orders globally for its SUV model and aims to manufacture 10,000 units by the first half of 2020.

The startup believes the model, featuring an eye-catching huge display, represents the transformation of the traditional car into a next-generation smart device for every user.

Also in April, Enovate said it had just finished its Series A funding, raising 2 billion yuan, bringing its total funds to 6.5 billion yuan for its plan to produce smart electric vehicles.

Founded by former Volkswagen executive Zhang Hailiang, the startup has begun presales of its first model, the ME7 SUV, which made its debut last year in Guangzhou, Guangdong province.

Enovate said it has started to build its online and brick-and-mortar network. It has announced plans to help build charging facilities across the country as well.

Leap Motor, advised by Deutsche Bank, is seeking private fundraising of 2.5 billion yuan, according to Reuters. Earlier in March, WM Motor announced it closed its Series C funding round at 3 billion yuan.

WM sold around 4,085 vehicles in the first quarter of the year, making it the best-selling startup, according to local media reports.

It was followed by Nio, which delivered 4,010 in the same period. Nio was the first Chinese electric car startup to go public.

The two best-selling startups' sales performance and the slash in government subsidies will make them reliant on financing for quite a long time to come, according to industry experts.

Nio Chairman and CEO William Li once said that it would take at least 20 billion yuan to become a carmaker; otherwise quitting would be a better option.