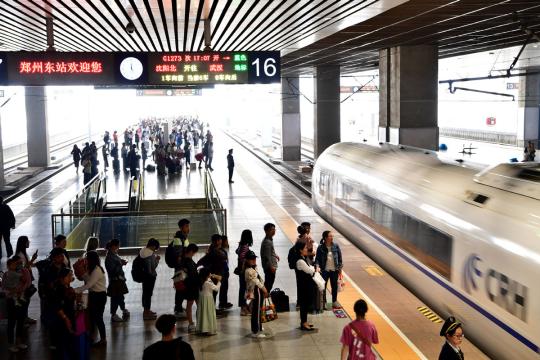 Passengers wait to board a train at Zhengzhou East station in Central China's Henan Province, May 4, 2019. (Photo/Xinhua)

Conductors may allow passengers to extend trips only when not overbooked

The country's railway operator said it will no longer allow train conductors to sell extended tickets to passengers who are already on board because the practice created overcrowding problems over the May Day holiday last week and was unfair to passengers who had booked tickets in advance.

Some of those ticket holders were not allowed to board because the train was already full.

The onboard sales ban was reported by Beijing Youth Daily after valid ticket holders were turned away from overcrowded slow trains in Nanjing, Jiangsu province, and Zibo, Shandong province, on Wednesday, the first day of the four-day holiday.

In the past, during peak travel times, many travelers found themselves unable to buy a ticket to their desired destination. Hence, they bought one for a shorter distance instead and then purchased additional tickets from conductors.

However, during the peak travel season, this presents a problem. When too many passengers aboard are allowed to purchase additional tickets, it results in overcrowding.

Under the new rules, conductors are not allowed to sell extension tickets on board after being informed that the train is overbooked.

Passengers who insist on staying aboard will be charged an extra 50 percent of the original price of their ticket, and must pay when they exit the station upon arrival. While conductors accepted money for tickets in the past, that practice is now banned.

"The railway will decide whether to allow passengers to purchase tickets after boarding based on the current passenger numbers and the number of presold tickets for the next station," the company said.

Many passengers complained on China's social media platforms last week that they had bought tickets in advance, but were refused entry by railway staff because of overloading－the result of some passengers buying short distance tickets after getting on the train.

"The practice violates the interests of passengers who abide by the rules, while those who break the rules take advantage of the losses and get what they want, which is discouraging to law-abiding people," said Zhu Lijia, professor of public management at the Chinese Academy of Governance.

"The overloading also disturbs the order of railway transportation, posing a threat to the safety of all the passengers on board," said Zhu.

The railway company apologized on Saturday in response to the incidents and said it would operate more trains in areas where there are capacity shortages during holidays.

"We will arrange transportation work more scientifically and strengthen controls to guide passengers to take trains in accordance with the tickets they bought," the company said.

Railway trips in China hit a daily record high on Wednesday. A total of 17.24 million railway passenger trips were made, surging 44.3 percent from the same day last year, the company said. As millions of people took advantage of the long break, some rail routes had difficulties meeting the travel needs of passengers. The company added a total of 758 trains to handle the passenger rush on Wednesday.