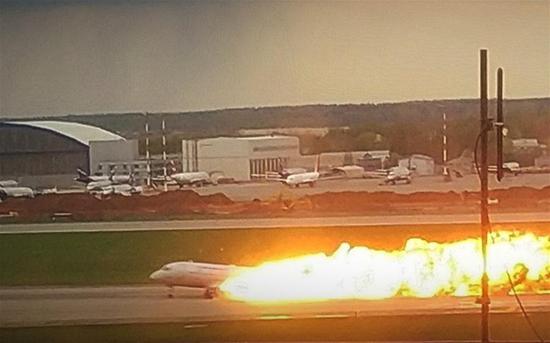 A passenger plane is seen on fire during its emergency landing in Sheremetyevo International Airport in Moscow, Russia, on May 5, 2019. (Xinhua/Sergei)

Russia's Investigative Committee confirmed Monday that 41 people were killed after an SSJ-100 passenger plane en route to the northwestern Russian city of Murmansk caught fire before an emergency landing Sunday at the Sheremetyevo International Airport in Moscow.

The committee reported 37 survivors from the 78 people aboard the airliner in an earlier statement.

The plane reportedly took off from the Sheremetyevo Airport at 18:00 local time (1500 GMT) and made an emergency landing after circling over the Moscow region for about 40 minutes.

It was "engulfed in flames" before the emergency landing, Tass news agency quoted a source as saying.

It was previously reported that the fire could be caused by lightening strike.

The committee has opened a criminal case on violation of safety regulations for air transport and started further investigation of the accident, according to the statement.

Investigators began to interview the victims, eyewitnesses, airport staff and the airline carrier, as well as others responsible for the operation of the aircraft, it said.

The causes and circumstances are being verified and an explicit conclusion will be made after a comprehensive study of the data and documentation is completed, the committee said.